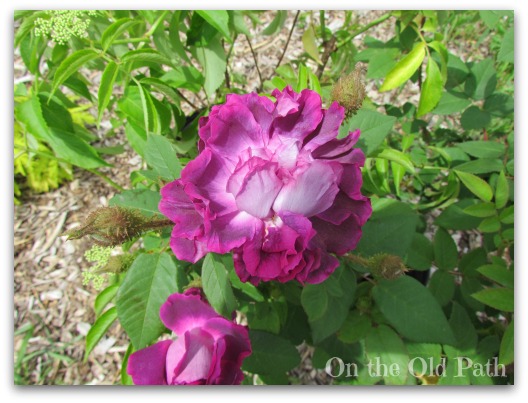 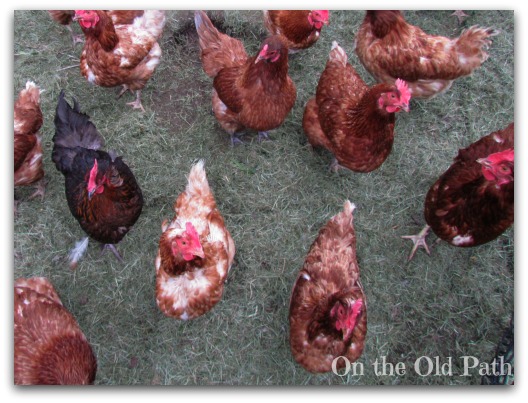 My guess is that Dave took this picture.  I joke that he is the chicken whisperer, he walks by and they all run after him.  Can you guess who is moulting? 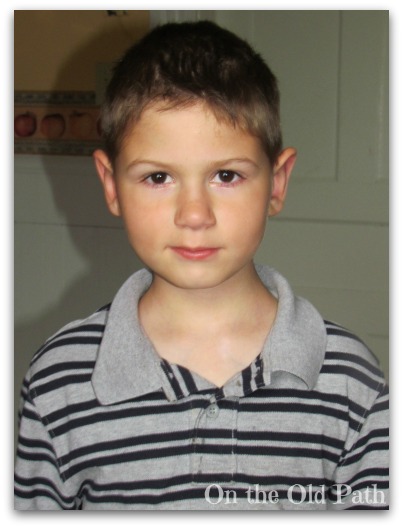 I wanted a picture for my update post about Joel, he was  in a silly mood and I ended up with several photos of him this was one of the ones I didn’t use. 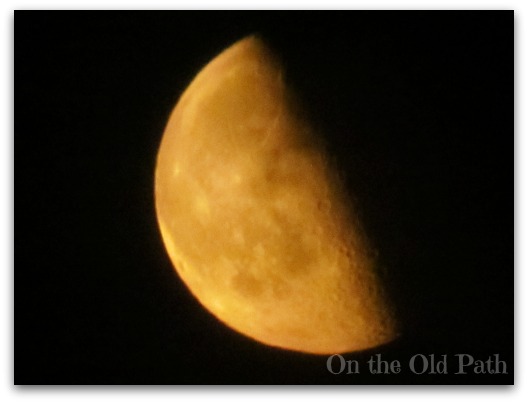 I have this picture listed as the 30th and the 31st,  it was the only picture taken on either of those days.  I got into bed the night of the 30th and couldn’t fall to sleep.  As I laid there looking out my window I realised I had not taken a picture for the day, and then I noticed the moon with its strange orange-ish colour, crying out to be photographed.  I didn’t even have to get out of bed as my camera was on my bedside table.  I was surprised it turned out as well as it did, because my window needs a wash.  I set the camera down and rolled over to try to get to sleep when I glanced at the clock and it was already past midnight… 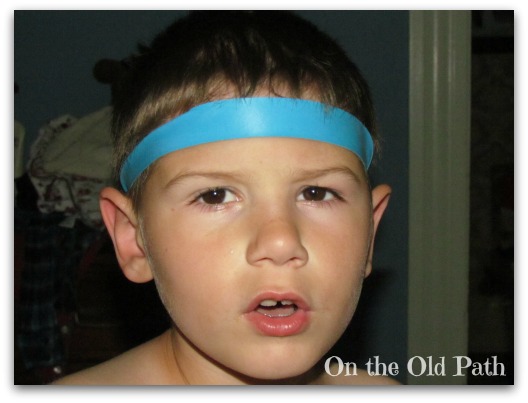 Not the most flattering picture of Joel, but there wasn’t much to work with on the 1st.  Joel is telling me a story while wearing the blue elastic thingie on his head.  He collects odd things from the hospital, this is the elastic thing they use to tie a tourniquet around his arm before drawing blood. 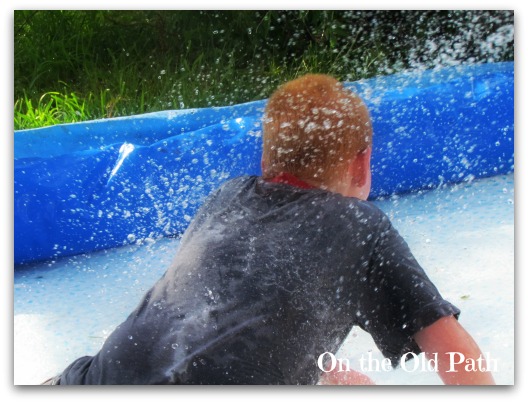 Friends of ours gave us a soft-sided pool last year, we decided it was time to get it out and begin setting it up.  I love the water-spray in this picture, the kids had a blast playing in the water. 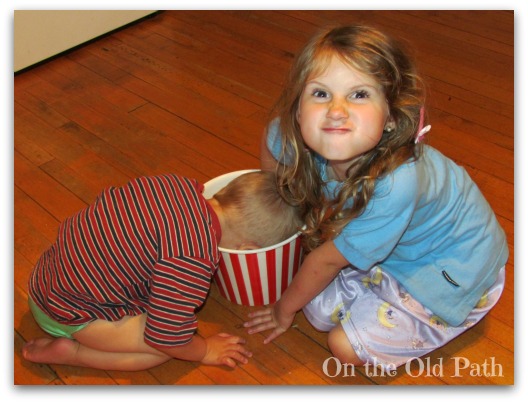 Hannah asks us daily if we are going to have popcorn.  Dave had just popped some for her and Samuel to share.  Dave took this picture and I couldn’t tell you if her crazy face is because her little brother has his head in the bowl or if she was just making a face for the camera. 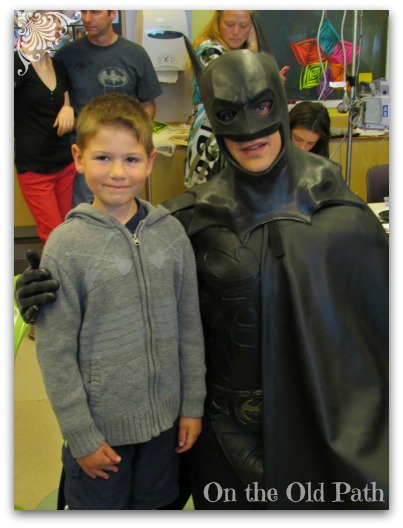 Joel was at CHEO for his MRI we went upstairs to meet his friend Sofia for lunch when a bunch of superhero window cleaners appeared.  I am really not sure what Joel thought of it.  At one point he was standing by one of the windows and the comic-book character was doing his best to make Joel smile, he finally got a smirk from him.  Batman came into the hospital to meet the children and when Joel was asked if he wanted a picture with him he said, “Okay.”  Joel was on the news that night.  Whether or not you’re a superhero fan, it certainly put a lot of smiles on the children’s faces, and I was happy to see the hospital doing something to make hospital stays a little more pleasurable. 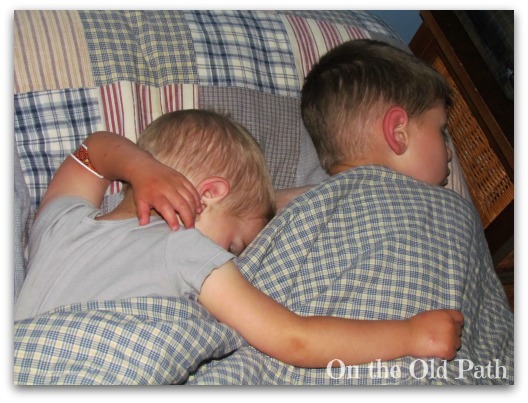 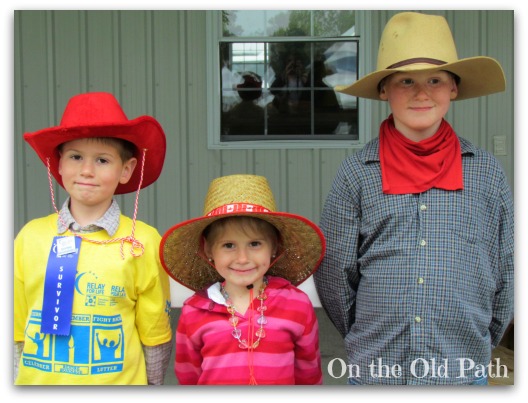 This picture was taken at Relay for Life and sadly most of the pictures I took that day really didn’t turn out the best.   Joel was so proud to put on his yellow survivor shirt, once again he walked the survivor walk with his grandfather ‘Biba.’  (Currently my children seem to be in to a western theme, well, at least the younger ones.) 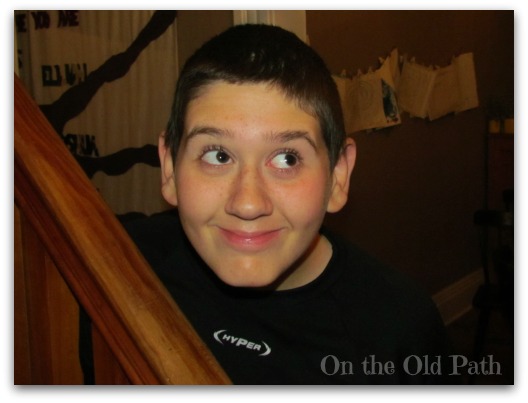 I am sure Elijah will love me for posting this silly picture.  Dave took it and once again I am unsure of the context…. goofing around…

I have wanted to make rose-water but I had read that most varieties we have today have been altered to have the perfect bloom, overtime their fragrance has diminished, which in turn gives you a less potent rose-water.   Earlier this month I was able to go to a heritage plant sale and amongst other things I picked up two William Lobb Rose plants.  Wow, are they fragrant.  Stay tuned for an update on my rose-water making efforts.