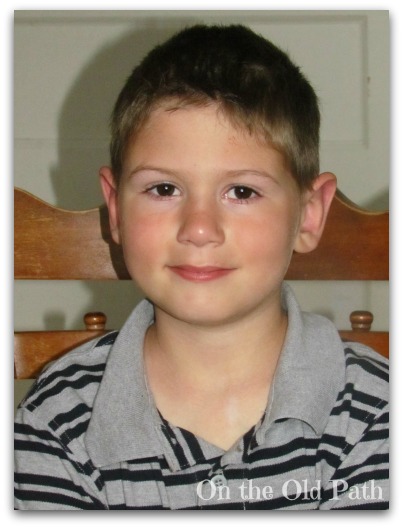 I have been wrestling with this update for a few weeks.  Trying to find the right place to start, and the right words. 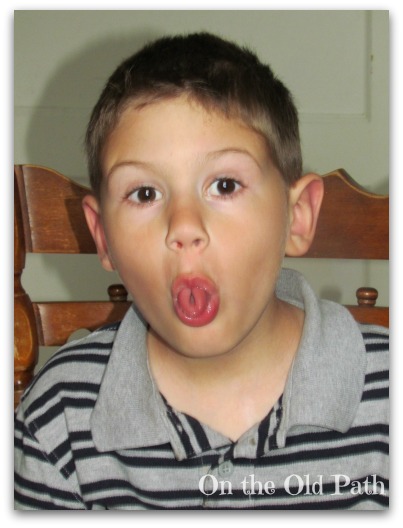 This is a question I get a lot.  Dave will often answer, “He is doing really well.”    Joel is doing well, he is cancer-free.  Most of the time he is a pretty happy boy.

BUT… and there is a but, and to me that but is HUGE.

With Joel there are so many factors that unlike Dave I can’t give that answer, maybe it is because I am the one that spends 24 hours a day with him, I am the one that works on his schooling, and I seem to be the one that looks to his future and tries to imagine what that will possibly look like. I wonder how I can prepare him for the future. (Dave has read this and clarified that Joel IS doing really well physically, and if he feels the individual asking about Joel is truly interested in the long answer then he’ll go into more detail.)

I want to start by addressing a few things that are said by well-meaning people, but hurt a little when I hear them.  I know no one ever means to hurt our feelings and that they are just trying to be an encouragement.

1)  When I share about Joel, I will often get the response, “You just need to keep praying, and believe that God will heal him.”  While I understand the heart behind that, it seems to imply that we are not praying, or perhaps, that we lack faith. I’m sure that is never what someone is trying to say to us. We do pray for Joel and of course, we welcome your prayers for him too.  Here is one of the BUTS… I need to look at the cold hard facts, I need to look at the studies and acknowledge what the typical outcome is for a Medulloblastoma kid.  Just because I am mentally, and emotionally preparing myself for what could happen does not mean, I am speaking a curse over my child or lacking faith in a healing.  I know it says over and over in the Bible, “your faith has made you well,” but it also says, “My grace is sufficient for you, for my power is made perfect in weakness.”

2) The other thing I hear, probably most often is, “Thank God he was so young, the brain is amazing, you’ll see.”  For most brain injuries this is true. For Medulloblastomas it is not true.  It is actually the exact opposite the younger you are the worse it is from a learning stand point.  I realize that an older child would be immediately aware of their deficits which has to be a whole other kind of horror.  Joel was too young to really grasp all that was happening to him.

I have been so nervous to write that, I don’t want to in turn hurt someone’s feelings if you have made one of those statements, believe me I know it has been said to encourage us. 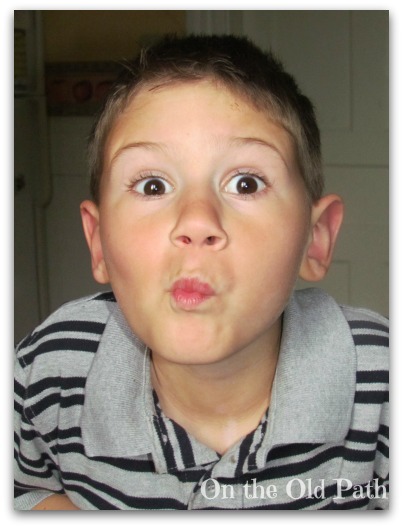 A friend from an on-line brain tumour group I belong to expressed it this way,

“The way I explain this to people is we are born with only so many brain cells. As far as we understand they are not reproduced. Many times when there is a brain injury the old neurons grow out new branches called dendrites that reform bridges to other cells.
It is different with radiation, radiation kills cells and those that are left tend to be stunted and have a much more difficult time to send out branches. Of course those places that have the highest radiation have the highest damage but there are other more sensitive areas of the brain that need less radiation to cause damage. One of those places is the memory centre.” ~Loice Swisher

The Good the Bad and the Ugly

The good has to be that Joel is alive,  is cancer free, and is a happy boy.

The bad and the ugly, here are some quotes taken from scholarly papers so you can understand where I am coming from. From the Journal of Pediatric Psychology;

“… radiation had adverse effects on intellectual functioning among patients treated for brain tumors. In 12 of 18 studies reviewed, patients receiving radiation had IQ levels 12–14 points lower than those who did not receive radiation. It was also found that children who were younger when treated with cranial radiation showed a 14-point deficit in IQ as compared with those who were older at treatment.  In a separate review of 12 studies published in 2004, it was reported that those treated by surgery alone , or with radiation of the posterior fossa only, showed less severe cognitive deficits than those patients treated with craniospinal RT for medulloblastoma.”

” Within the normal population, an IQ score is expected to remain stable across time.  However, in a longitudinal study the intellectual functioning of pediatric patients with medulloblastoma was found to decline as time from treatment increases. The effects of RT began to clinically impact cognitive functioning at 1 year post-treatment and showed a continuing pattern of decline over time. It was also found that patients who were younger at the time of irradiation were at risk of impaired cognitive functioning sooner after treatment than those who are older. Analysis of longitudinal changes in IQ scores over time revealed that younger patients experienced an immediate decline that continued over time while the older patients experienced a delay in decline for 2 years.”

“Specifically examining patterns of verbal memory, a recent study compared 40 children treated for medulloblastoma with 40 demographically matched controls. The children treated for medulloblastoma showed a mixed profile of verbal memory deficits including both retrieval and recognition impairments. Examining change in verbal memory over time, patients with posterior fossa tumors have shown an overall decline in ability following treatment. Similar deficits in attention have been demonstrated. Examining dose- and age-effects in relation to attention, it was found that like IQ, younger patients (<8 years of age at diagnosis) and those who received higher dose of craniospinal RT (36 Gy) experienced greater deficits in attention than those who were older and who had received lower doses.”

The above quotes look mostly at the predicted decline in mental function.  Joel did receive 23.4 Gy to his whole brain and spine and the tumour bed received 53 Gy , and his brain and spine were radiated at the tender age of 4, making him a major candidate for the many issues touched on above. 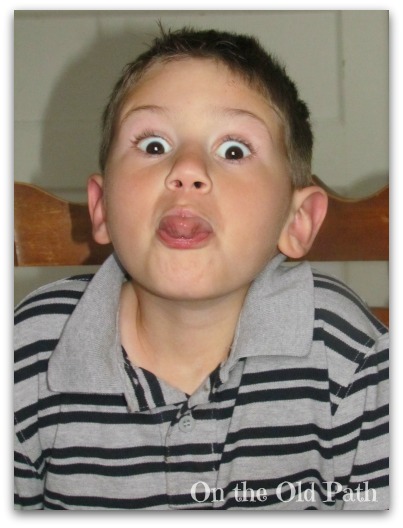 According to his most recent Neuro-psych evaluation we know that his memory, processing speed and cognitive function have all been affected.  They have gone so far as to label him Developmentally Disabled.  Joel has aged out of all his therapies and I have been handed reports from most of his therapists.  The one from his Occupational Therapist states that Joel while showing some signs of improvement is still way behind his peers by a few years.  The assessment by his Speech Therapist places him between a 4.3-4.9 year old. (Joel will be 8 this summer).  Joel still requires therapy, but, seems to fall through the cracks, as we homeschool.  We are looking in to private therapy, however, this is costly.

Joel has issues self-regulating.  As a child develops they go from a toddler who screeches if they do not get their way to a child who can recognize that they have been wronged but also knows that screeching is an inappropriate response.  When Joel had his surgery at 4 it disrupted this process.  Joel knows that reacting that way is inappropriate but yet does not have the ability to always self regulate, so he has the added frustration of knowing his response is wrong but the development in the brain has not caught up to where it needs to be to help him cope.

He still needs some assistance in the washroom, and when you’re pushing 8 this is very embarrassing.

In so many ways he seems stuck at 4. The hard part is, his hair has grown back, his balance has improved quite a bit, his eye surgery was a success.  He has gained back the weight he lost, his colour is much better most of the time.  He looks the picture of health, and he is!  Yet he is still so broken inside. Hannah, his sister who is 23 months younger, has surpassed him in every way.  She has noticed it too.  The other night she said to me,
“Mommy, do you know what is weird?  I am smaller than Joel!?!”
“Yes?” I responded questioningly.
“Well, I can do more than he can, shouldn’t I be bigger?”

We had a talk about cancer and the things it has robbed from her big brother.

The concept of opposites is beyond him right now, I have explained it in so many different ways and he cannot get there.  I have to say, “Your bedroom is upstairs and the basement is____?”  For him to get it.  We could go through a few of these the fire is hot and the ice is  ___?  Even after that if I jumped to just the word ‘big’ he would not be able to pull ‘small’ unless I gave him another sentence.  It is too abstract without the sentence.

These are just the mental issues that lay before him, he has stopped growing and he is now on growth hormones with injections 6 days a week.  He will likely need hormonal help through puberty.  We have been told that he will likely not be able to hold down a job, have children etc. Due to the radiation and chemotherapy he is also at risk for secondary cancers. I think one of the difficulties is I can go in and talk to his doctors and they all just shake their heads, not knowing what to say or how to help. I recently wrote this to a friend who asked about Joel after a long drawn out answer I said, “Basically, I had a normal kid who got cancer, they kicked the cancer but they broke him in the process, and I am just desperate to fix him, the literature says that the damage is permanent and it will continue to decline. Yet I have to continue to believe that my kid can beat the odds, so I keep searching for ways to help him. I just feel like I am fighting a losing battle all alone.

As you can see by the pictures in this post, Joel is very much like other boys his age.  It is next to impossible to get him to stop being silly and take a nice picture.  He pretends he is a pirate, or a knight in shining armour, he loves ice cream and roasting food over a bonfire.  He wants to have friends and dreams of being a police officer, these are all normal little boy things.  What isn’t normal is how his brain now works.

If you persevered to the end of this post, God Bless You!   I know it was long and technical in parts, but this is the best I know how to answer this question and feel I have done it justice.

P.S. His routine MRI is tomorrow.