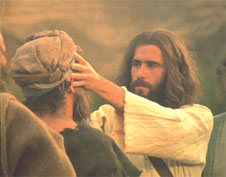 Lately,   I have been thinking a lot about the various accounts we read in the Bible of people being healed.  How did they live after the healing?  It is difficult to live in today’s society with some form of disability.  Yet there are services in place to help.  We have wheelchairs and seeing eye dogs, lights that flash for those who are deaf.  We have financial compensation and special homes and services that help with independent living.

However,  if we go back 2000 years, I can barely imagine what it would be like to be blind or lame.   In the New Testament we get small glimpses into the lives of a few of the people Jesus healed.  Can you imagine how their lives radically changed after being healed?  How did they live after their healing?

Do you think HIS face was burned into their memory forever?  Do you think they could close their eyes and bring back the details of the moment they were healed.  Was there a dog barking or a child crying were they near a babbling brook?  Or were they near the sea and every time they smelled fish the memory of what Jesus did would flood back into their mind?

Did they go on about their lives doing the things they had longed to do with a grateful heart?  Or did they forget?

When they met another lame, or blind person did they have survivor’s guilt?

What happened after the healing?  Of course,   no one can answer this question as we are not privy to this knowledge.  We do know that their lives went on.   How did they live?  What happened next?   Can you imagine it?  In John chapter 9 we get a small taste of what happened after a blind man was healed.  His parents are being questioned by the Pharisees,  John 9 “18-23

They still did not believe that he had been blind and had received his sight until they sent for the man’s parents.  “Is this your son?” they asked. “Is this the one you say was born blind? How is it that now he can see?”  “We know he is our son,” the parents answered, “and we know he was born blind.  But how he can see now, or who opened his eyes, we don’t know. Ask him. He is of age; he will speak for himself.”  His parents said this because they were afraid of the Jewish leaders, who already had decided that anyone who acknowledged that Jesus was the Messiah would be put out of the synagogue.  That was why his parents said, “He is of age; ask him.”

A second time they summoned the man who had been blind. “Give glory to God by telling the truth,” they said. “We know this man is a sinner.”

He replied, “Whether he is a sinner or not, I don’t know. One thing I do know. I was blind but now I see!”

Can you imagine it,   we”ll call him Jotham as we don’t know his name.  Oh the joy to have been blessed with a son, but soon the joy begins to fade as time goes by his mother can see her precious baby does not gaze at her the way other babes gaze at their Mamas.  Soon their fears are confirmed their little boy is blind.  All their hopes and dreams are dashed and they mourn his future.  They watch as he grows up and other children make fun of him and they know he has no future.  No job,  no chance of a wife,  and of course,   no children.

Then one day their grown son stands before them and can see!  Everyone in the village knows poor Jotham, they begin to ask each other is that Jotham??  “No can’t be he just looks like him.”   Someone else shouts,  “No,  that is Jotham.”  Jotham smiles from ear to ear,  “Yes it is me I can see!

Do you think he married and had children and then grandchildren who would sit on his knee and listen to the story they’d heard a thousand times of the day Jesus had healed him?

Did he walk tall,  with a huge smile on his face ready to tell anyone who would ask the reason for his joy?    Did he fear one day he would wake up and be blind again?  Did he ask why me,   why was I given this amazing gift?

We know that after he was questioned by the Pharisees Jesus talked with him again and he worshipped Jesus. (John 9:38)  Did he live a life of worship?

We don’t see miraculous healings like that.  We do see people healed though we just don’t seem to see the instant healing like we read about in the Bible.  I know someone who had a growth and when they opened her up it was gone.  The doctors shook their heads and couldn’t explain it.  It was there on the scan and now it is gone.  I believe that instant healing does happen we just don’t see it that often.  But what about the slow healing that takes place when we give our broken lives to Jesus.    As HE patiently takes our brokenness and brings healing to us.   What about those who recover from a horrible car crash or a debilitating brain tumor.  The healing comes at a terribly slow pace yet we know they are in God’s hands and HE is working a miracle in their lives.

How do WE live?

I have a blogging friend Marlece who wrote about a picture God shared with her,   it is worth stopping by her blog Momma Says and reading it,   but the bottom line in her post was in all things to keep our eyes focused on HIM.