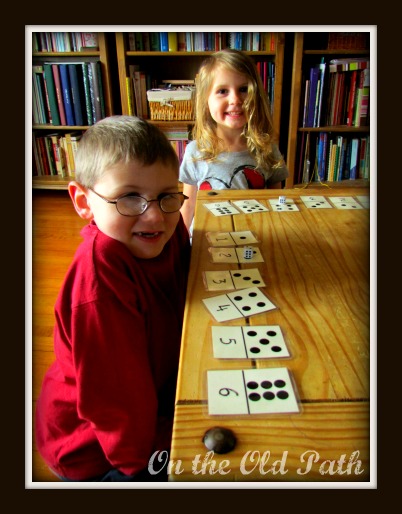 Joel seems to be dominating my blog lately, truly I do have other children and I do spend time with them too. Joel is a bright little guy.  He has an excellent sense of humour and keeps us laughing.  He is not unintelligent, but his brain has been effected by his surgery and possible by the radiation too.  We haven’t given up on healing or anything like that but we still have to live in the ‘now’ and meet Joel where he currently is at. It isn’t that Joel does not necessarily understand something quite often he does but the right words don’t always come out.

I think I have shared before that Joel could look at a ‘T’ and know it is a ‘T’ but say ‘F.’  That is because words are stored in our brains in drawers that contain groups of words.  Today, tomorrow and yesterday are stored together.  Husband and wife are stored together.  On, under, beside, next to are all stored in the same drawer.  We know this because Joel can access the right drawer just sometimes he pulls the wrong word.  I know this because if I show Joel a flash-card with a letter on it often he can pull the wrong letter name but if you lay all the flashcards down and ask where is the ‘G’ Joel can find it.  Interestingly Joel has connected with the sound the letter makes more so than the name.  Perhaps the name is a little abstract where as the sound of the letter has a function.

When it comes to numbers again Joel has been challenged with the names of the numbers.  I decided lets move slowly.  I am concentrated on 1-6 right now and using some flash-cards I made along with a dice. (Shaking the dice and rolling it in good Occupational Therapy too.  Shh!)  I made two sets of cards so he and Hannah can play together.  Hannah has already mastered the numbers but is not as good at rolling a dice or with memory match.  We have made up a few games.

I am sure others could come up with other inventive ideas of how to play with them.  I printed out 2 copies cut out the cards and then laminated them.  I thought I share it in case anyone else could use a simple early math skills game. I am having some problems with my link for now try following this link 1-6 Number Game