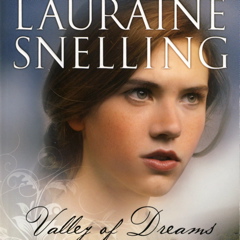 Valley of Dreams is written by Lauraine Snelling.  She has penned over sixty books!  Once again she has weaved a wonderful tale, although it will leave you hanging.  It is the first in her new Wild West series.

Here is the Publisher’s blurb,

When Cassie Lockwood’s mother died, Cassie began traveling with her father’s Wild West Show. Along the way, she became an amazingly skillful trick rider and sharpshooter, likened by some to the famous Annie Oakley. When her father passed away, she continued to work with the show, having nowhere else to go.
Now Cassie has discovered that “Uncle” Jason, the show’s manager, has driven the show into debt, and he’s absconded with what little money was left. Devastated, Cassie decides to try to find the hidden valley in the Black Hills of South Dakota where her father had dreamed of setting down roots. She has only one clue. She needs to find three huge stones that look like fingers on a giant hand. With Chief, a Sioux Indian who’s been with the act for twenty years, and Micah, the head wrangler, she leaves the show and a bundle of heartache behind and begins a wild and daring adventure.
Will they find the valley before winter closes in on them?
I don’t want to give away too much so I won’t mention much more about the actual story.  Cassie lost her mother at ten and then five years later to the day she lost her father.  We find her at the beginning of the story five years later on the anniversary of her parents deaths.  All she has ever known is the Wild West show.  Mrs. Snelling does a great job of setting the scene for the reader and developing  the characters.
The only slightly negative thing to say is that she is definitely setting the stage for the next books and the story just ends.  You might want to wait until you have the next one before starting this one if you find it extremely annoying to be left hanging.
I have a copy to share with my readers, so if you’d like to win this copy leave me a comment to be entered.  For another opportunity follow me on Facebook and for yet another opportunity follow along on Google+ leave a comment for each one!
Book has been provided courtesy of Baker Publishing Group and Graf-Martin Communications, Inc.
Available at your favourite bookseller from Bethany House, a division of Baker Publishing Group