This past year or so has been characterized by ups and downs. I think most people can relate to that… I think in the past our ups and downs were just spread out more than they currently are.

I’m 30 weeks pregnant only ten to go… my glucose test came back with high blood sugar so I had to go for the 2 hour test and I am waiting to hear if I have gestational diabetes.

The hospital called and they don’t have enough beds for Joel to come in on Monday so he has been bumped to Tuesday. So instead of being in the hospital from Monday to Wednesday, we will be there from Tuesday till Thursday. Doesn’t seem like that big of a deal but it means rearranging rides to and from the hospital, Dave had to switch shifts, I had to switch a doctors appointment and we had to rearrange child care.

We have been waiting for some time to receive a copy of Joel’s Neuropsychological Assessment it came in on Monday and it wasn’t good. Ugh basically it assesses his current level of cognitive function. It looks at 6 different areas… in 2 areas he scored <1>

I know there are all sorts of variables that affected his testing;

-shy with medical staff
-couldn’t use his right hand
-speech was effected after surgery etc.
It isn’t a total surprise cognitive issues are a common side effect to having a Medulloblastoma. So now once again I feel like I need to become an expert in another area. Unfortunately, the report gave no direction at all, it did describe Joel as pleasant and co-operative though. I am working hard at quickly incorporating cognitive skill building activities into our everyday routine. I will also see Joel’s case nurse on Friday so I can get her take on the report and see what kind of suggestion she has. It was not fun to read his assessment, Joel is a smart little guy that has had mountains thrown in his path. Are the mountains impossible to scale I am walking in faith that they aren’t but I think he is going to have to work harder than the average child.
We all want things to go smoothly for our children and want to move the debris from their path so they have a smooth walk, unfortunately most of it we are unable to remove and so we just have to encourage them and walk the path with them.
We have had some ‘ups’ in recent days, some great family time together. A gift from a friend to help us out. Happy children who are happy to help out. 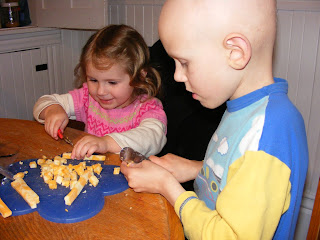 Another thing to celebrate Joel would not use his right hand 8 months ago he has come along way the kids are cutting up cheese for supper. Joel also cut the red and green pepper for me (with a little help). 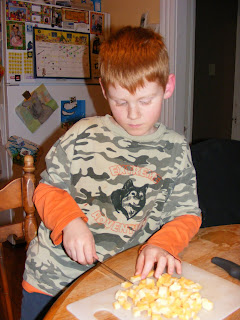 I am blessed to have all these wonderful helpers.