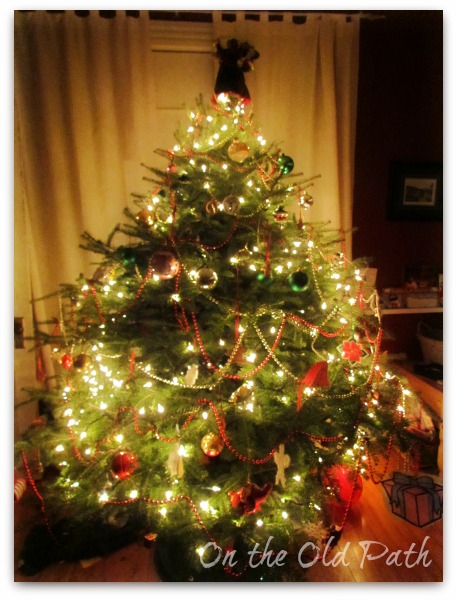 Oh we have been busy, December is just plain busy around here, every year I tell myself I am going to do better and get everything done way in advance but I seem to always find myself in mid December running around trying to finish projects up.

In my defence this year I have had a case of Murphy’s Law, ‘anything that can go wrong will’.     I have had things go wrong with the stuff I am making, wrong yarn, running out of one colour and not being able to match it.  Thinking I had the right match but it was just the slightest bit finer, only noticed it once I had crocheted a few rows.  Back to the store.  Had to take apart Hannah’s and start over, Taliah’s had to pull one part apart a few times.  I had an idea for Hannah’s and Samuel’s Christmas presents and then less than a month to Christmas I found out it was a no go.  Still rethinking that and running out of time.

I cannot begin to tell you all how many times my computer has conked on me… and countless little things.  Yet amongst all of that we have had time for fun.  I thought I would get this posted during the first week of Advent. 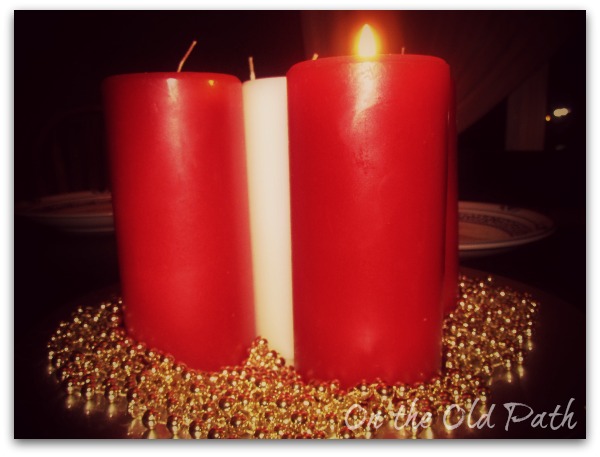 Yet here I find us in the second week of Advent … 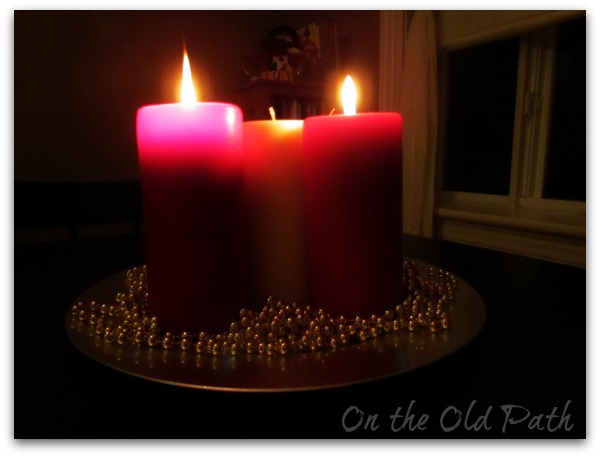 On November 30 th  we hosted a homeschoolers meeting.  It was wonderful to connect with all the homeschooling Mommas.  We have not been a part of an active group for years and I have been feeling the tug to do something about it for a long time but with Joel’s health I just put that thought on the back burner.  I am so glad to have finally stepped forward to do something, I have no idea what shape this group will take but I am excited to see what the future holds for it.  Our biggest challenge is that because we are all rural we cover a large geographical area!

We have been busy with Joel but I will save all of that for another post.  As far as we know Joel remains healthy and cancer free!

Our children have had fun decorating for Christmas, each day we seem a little more decorated than the last.  This past weekend we went and cut down our tree. 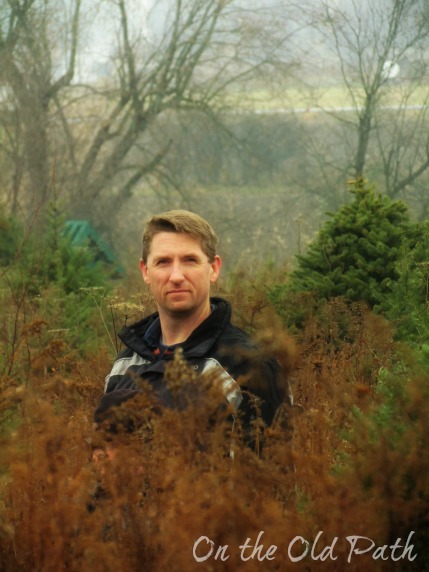 For us finding a tree always seems to be an adventure.  This was the first year since Joel’s brain surgery that the whole experience didn’t have him dissolved in tears.  In 2010 even though we were almost 9 months out from surgery his balance was terrible and he kept falling in the cold snow it was a disaster.  Last year balance played a small part but it was mostly the cold.  This year he only wiped out once, and he rallied himself very quickly.  I think it is safe to say he had a good time!  Those are weeds which had grown around the trees so it was no easy task manoeuvring through there .  To give you an idea Dave is 6 foot  and Joshua and Joel are standing beside Dave.  If you look closely you can catch a glimpse of Joshua but Joel is lost for all the weeds. 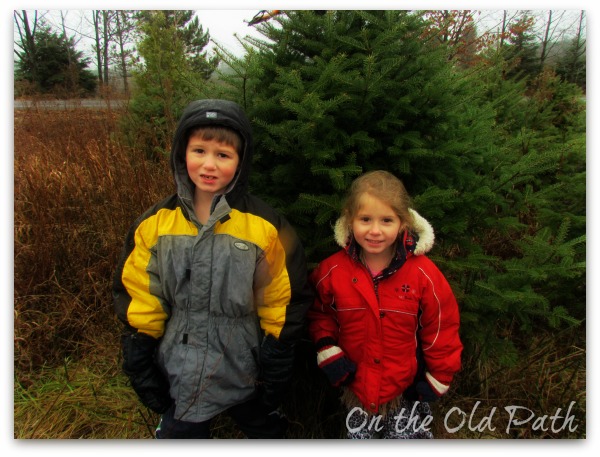 Finally, the perfect tree!  We could have gone much taller but the problem we seem to have is the taller you go the wider they get. I have some interesting effects going on with some of these pictures because it was misty (not quite a rain, my Mom would call it a Scottish Mist).  Dave went with Samuel to get the van and Elijah and Joshua cut the tree down!  Way to go my young men. 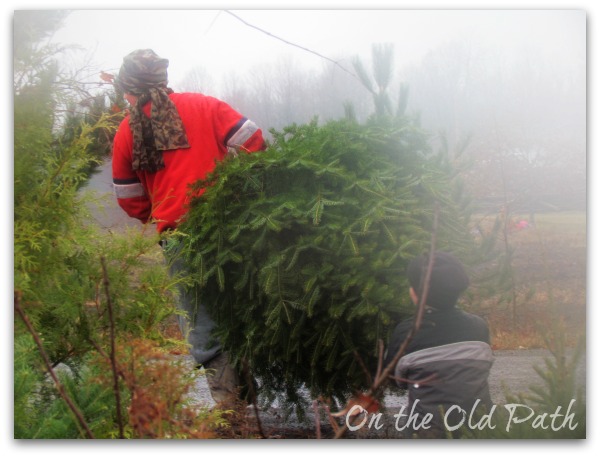 They carried it out too.  We actually put the tree in the back of our large van.  We struggled last year to get it up on the van, so I guess they thought lets just shove it in the back.  It looked like we were trying to smuggle it out! 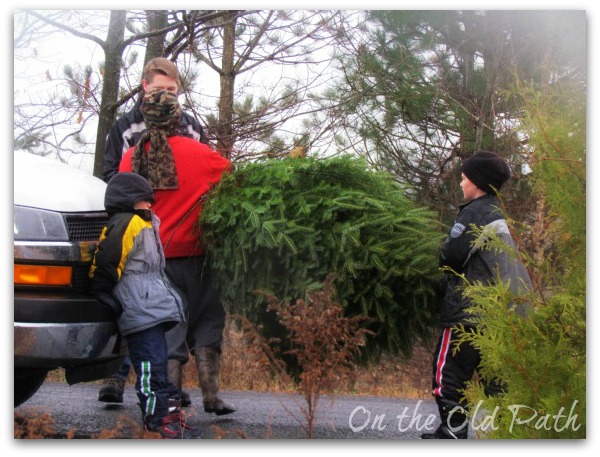 Where we went to get the tree they invite you in for a mug of hot apple cider or hot chocolate along with some Christmas cookies.  They have a lovely dog named Gracie that the kids loved on for a bit. 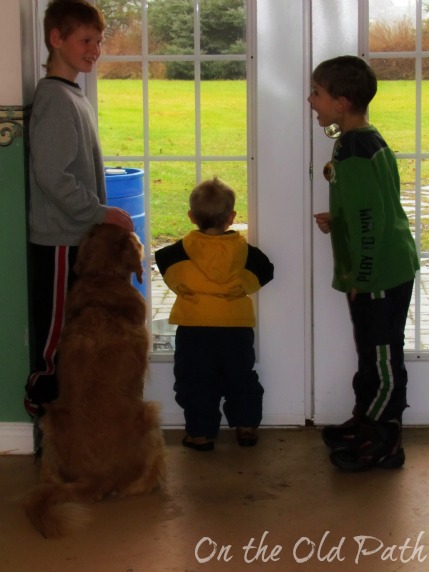 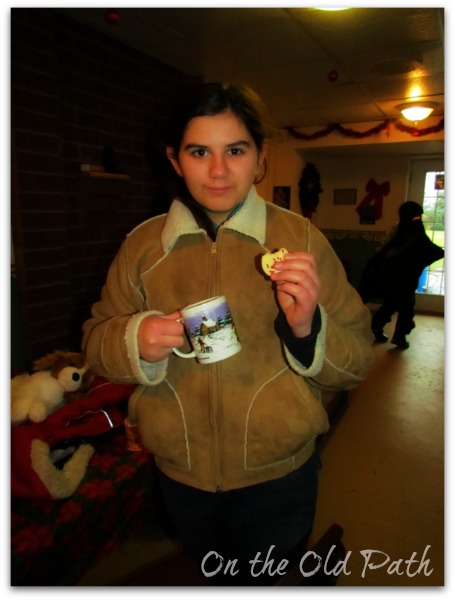 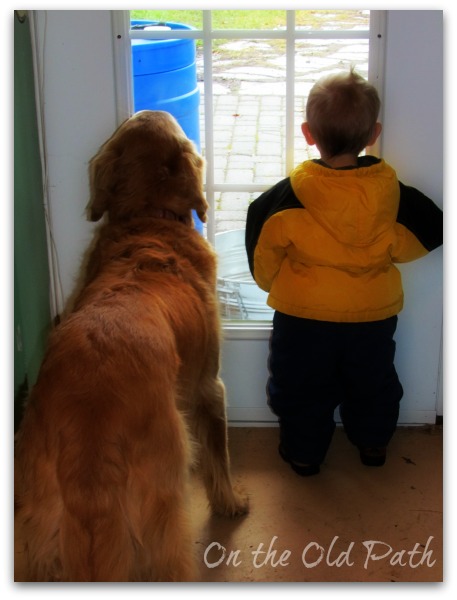 Of course the children could hardly wait to decorate the tree but I like to have the tree hang out indoors for a while before we decorate. The next day I pulled out the lights and plugged them in, fantastic they still work.  We got them on the tree and plugged them in.  They didn’t work.  I looked and looked and could not find the bulb that was causing the problem, off to the hardware store for more lights.  Oddly enough the next day we plugged them in and one strand was working, on the second strand I replaced a bulb and the other strand worked too.  The kids used them to decorate their rooms.  Here is our little tree.

As I said I have been busy trying to get gifts made some I can’t share pictures of as I know some of the recipients read here.  I can show you these, two down and one in the works.  The blue one is for Taliah and the green one is for my cousin’s little girl and the one in the works is for Hannah, hers will be the same size as the green one. 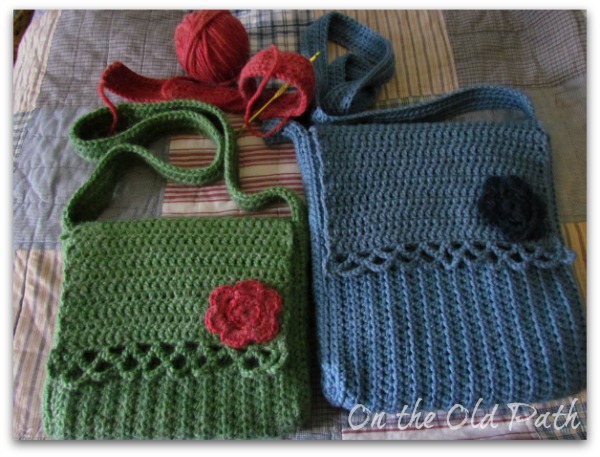 I may make one more over the Christmas holidays for me, I like the way they turned out I am thinking brown for me with either a pink flower or a blue one hmmm.

There is never a dull moment and when it gets quiet I begin to wonder.  Today it wasn’t too quiet as I heard lots of giggling and then I was asked if they could borrow the camera. 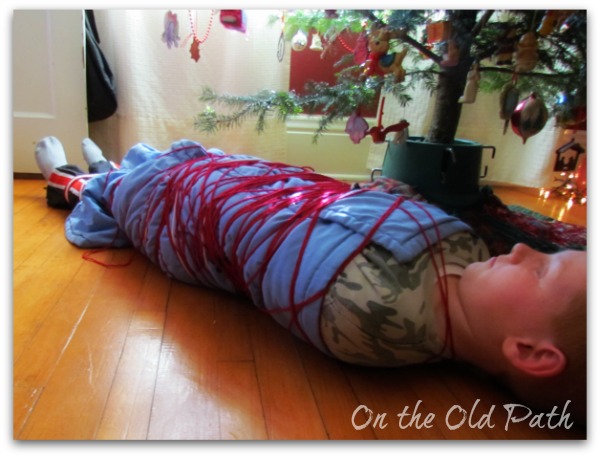 They started out upstairs and kind of slid him down the stairs where he became a gift under the tree.  This quickly moved to a re-enactment of a scene from Gulliver’s Travels. 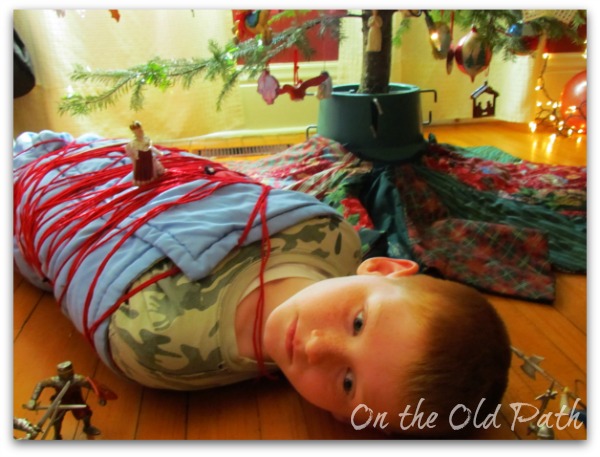 It is fun to see where their imaginations take them.  That about catches you all up on what has been going on over here.  Hope you are all well too.

Dave pointed out to me that in the midst of all of this I neglected to mention that four of our roosters will crow no more as they are at rest in our freezer.  This was our first attempt at butchering our own and as always it too was an adventure.  Elijah manned up and helped Dave out, but Dave did the bulk of the work with Elijah as his much needed assistant.  The other boys worked at keeping the, far too interested, cats away.  The first rooster to go was the mean rooster, he actually took Joel down once and was on Joel’s back.  Joel stood there and yelled, “Die Die Die!”  It sounds kind of mean spirited but there was bad blood between those two.  Joel’s mood changed rather quickly because one of the roosters he liked was destined for the pot too.

At one point Hannah looked out the window to see one of the chickens which had been plucked, head and feet removed, looking much like your regular store bought chicken and she remarked, “Hmm, I can’t even recognize him now!”

Our chicken coop has also undergone a reno.  I believe the term, ‘Sandford and Son,’ has been thrown around.  It isn’t pretty but it gives the chickens some more space and buys us time before we build our ‘pretty’coop.

Okay, I think with the exception that we have also made jam from fruit which I frozen in the summer, I have now official brought you all up to date on what we have been up to.