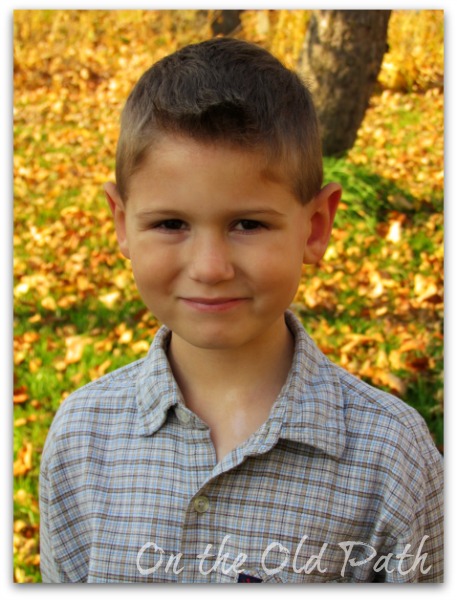 I feel like I am starting over. It has been so long since I sat down to blog.  I don’t know if I have ever gone a whole month without blogging, it certainly was not my intention to stop blogging.  It really was a case of the same ol,d same old problems, I have been having recently: computer issues, sickness, and busyness.

I think my computer died, and then Samuel and I were both under the weather at least once, and finally, Joel’s schedule has been crazy.  We had several weeks where Joel had 4-5 days a week where he had appointments.   As a homemaking, homeschooling Momma I feel one of the keys to success is being home.  I felt like I was working full-time just getting Joel to all of his appointments and then there is the laundry for 8 with one in cloth diapers, meals,cleaning etc.  Suffice to say, I was barely getting the basics done, and even then it was purely survival mode.

Joel started therapy while he was still in active treatment and it has been close to 2 years of therapy.  With currently 4 appointments a week (speech therapy, physiotherapy, occupational therapy and emotional therapy) packed into 2 days.  He had therapeutic riding once a week but that is done now until the spring.  He was going weekly to complete his neuro-psych evaluation, it took a few weeks because he fatigues easily still.  Throw in family dentist appointments and I felt like I was hardly home.

I did something I have never done before… I asked for a month off.  Yesterday was our last therapy appointment until December!!  I will meet with all his therapists in early December and we will discuss Joel’s needs at that time.   It is my gut feeling that if he is in a routine everyday, and having homeschool on a regular basis we will see improvement.  My hope is that his therapists will begin to see him on a more infrequent basis.  If they feel he still needs intense therapy I am going to see if they could fit all 4 appointments into one day.  2 in the morning and then a lunch break and then 2 in the afternoon.  You can all pray that Joel thrives on a routine and his therapists are blown away by his improvement!!

In November Joel only has 2 appointments an eye appointment tomorrow and dental surgery later in the month.  Poor Joel, ever since his cancer treatment he has an incredible gag reflex.  They can’t get in his mouth to get any work done, so they are going to knock him out to take care of his cavity.  They have never been able to get x-rays on him so they are going to take care of that at the same time and if there are any other cavities that they couldn’t see they will take care of them then.  I hope he outgrows the gag reflex because it is a little crazy to be put under general anaesthetic just to get a filling done.

Regardless, I am just looking forward to being home and having a routine.  Samuel will be 2 in February and is my only child to not have a schedule, he was only a few days old when he accompanied Joel for chemo.  He has been back and forth to appointments with Joel falling asleep in the car and waking up when we arrive at our destination.  With just enough sleep to not go back to sleep but not enough sleep to chase away the grumpies.

Today was fantastic, I was up early (that part wasn’t too fantastic) I organized homeschool things.  We had a few lessons, after lunch I nursed Samue,l he fell asleep and we all had an hour quiet time before doing one more lesson for the day.  Samuel actually slept for another hour, but I only require one hour quiet time for the other children.  I think it is a good discipline to have.  Not everyone finds it easy to be on their own and quiet for an hour, but everyone did great.  Oh, did I ever appreciate that hour!   Some laundry and tidying got done too!

November may be a quieter month, travel wise, but I have much to do in this month off, but I do believe I will be able to afford some time to be spent here.  I have greatly missed the community here.  I love hearing from all of you.  It makes things easier to know we are loved and prayed for!

So what can you expect around here???  Well, I will probably post some of ‘what we were up to over the last several weeks’ posts.  I want to finish up the princess tutorials, sorry that has taken soooo long!   Perhaps a final wrap up to the garden of 2012, plus so many projects in the works… stay tuned!

Lastly, I would be amiss if I did not publicly thank my friend Louis who brought my computer back from the dead.  I know he told me what was wrong but I have long since forgotten, but I am so grateful for his help.  Not only can he fix ailing computers, but he also does great web design, he can migrate a blog from blogger to wordpress with comments etc. intact.  I have only scratched the surface of his many talents.  If you are needing help with your blog check out his site christiatech.