How do you make a Birthday special for someone who works night shift and is asleep all day??

Well, we all got up early (this huge for me,  Samuel is still not doing well through the night) I made sure everyone was up and dressed.  We had some Mozart playing softly in the background.   Elijah had been out to the road and brought the garbage and recycle bins in.  The animals were feed and breakfast was started.  Elijah put the bacon on and started the fried potatoes which Joshua had peeled.  Taliah had the eggs going, Joel helped make the scrambled eggs and Joshua helped make the boiled.  Taliah also over saw the making of toast.  I had made blackberry juice the night before.

When Daddy came home at 7:30 breakfast was started and everyone was up and dressed.  After a fun breakfast we had family devotions and then Daddy headed off to bed.  It was time for us to fly through some homeschool before Samuel and I rushed Joel to therapy.  The other kids had school to finish and chores to do well we were out. (Dave is there in case of emergency and Elijah is 13.)  Oh I forgot to mention that Joshua and Hannah made the bed up especially nice for him fluffed pillows and everything!

After therapy we picked up a chocolate brownie caramel cheesecake, 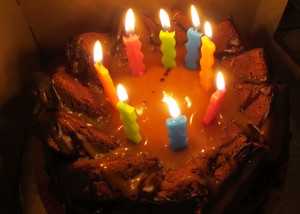 I know a better woman would have made him a cake and I have on other birthdays.  We got home just in time to make him one of his favorite dinners,  Mexican Dip,  I’ll post the recipe later this week.   We hung up the Birthday banner that we made for him and woke him up. 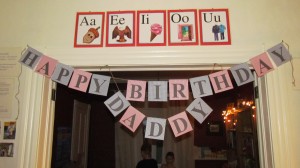 We enjoyed supper together and I took a picture with him and all his little blessings (okay some of them are not so little.) 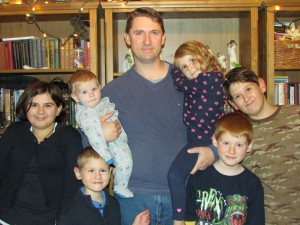 Finally,    it was time for him to head off to work.  We will further celebrate his day on the weekend in combination with Canadian Thanksgiving.