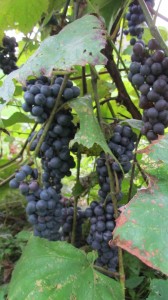 This years garden was a bit of a disappointment,  perhaps that is an understatement.   Yet I knew not to expect much,   Joel finished cancer treatment the end of May and then in June he started going twice a week for therapy instead of once a week.  (With Therapeutic Riding he is now up to 3 therapy sessions a week.)  Sweet little Samuel,  who is not so little,  has turned out to be a bit of a clingy guy.   He is happy for the most part but likes to be with me all the time.  This combination doesn’t lend itself to dynamic gardening.  All that aside and I am still not sure that one will ever be able to use dynamic and garden in the same sentence when describing me.  Unless it was, “You know Cheryl,  she’s the one who’s neighbor has a dynamic garden.”

The one thing that did well this year was our grapes.  In the spring Dave pruned the vine right back.  I was worried but he’d been watching several youtube videos on how to do it.  Within a short time we had lots of new growth and lots of clusters. 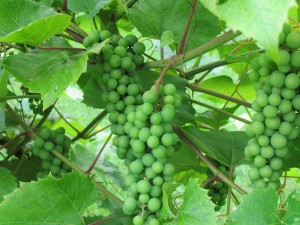 I think we probably could have harvested a few days early but they were still really nice. 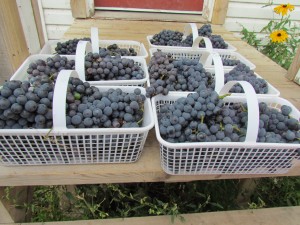 We did have a lot of bugs so we moved the processing operation outside. 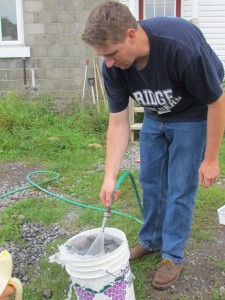 Dave grabbed a big bucket,    added grapes to it and ran the hose on them for awhile.  We had these guys anyone know what kind of bug these guys are??  We also had earwigs {{{YUCK}}} I would love to hear your ideas on natural bug control for earwigs and whatever those guys are. 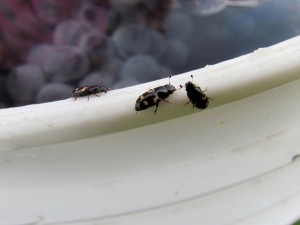 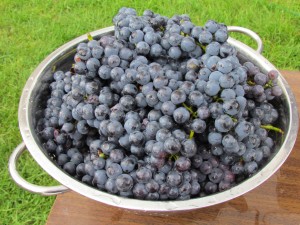 Of course, as I alluded to earlier time is precious around here so I had to freeze the grapes and will thaw and process them into juice and jelly later.  We simply washed and de-bugged them,  plucked them off their stems and then bagged them.  In the end from one vine we had 21 pounds. 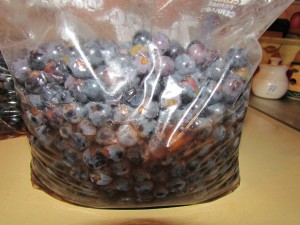 Dave is looking into propagating a vine from the current vine.  Hopefully in a few years we will have several vines going. 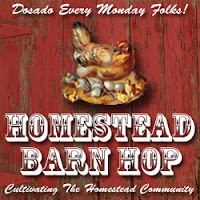