I wanted to take some time and share something I have become rather passionate about.

My stats are a little old but I believe there are about 10,000 children living with cancer in Canada today. That ‘s  too many!

Cancer is the leading disease related cause of death among kids in Canada and the US after the first year of life.  More deaths than asthma, diabetes, cystic fibrosis and AIDS combined.  And is second only to accidents.

One in four children who are diagnosed with cancer will die of the disease.

Approximately 2/3 of survivors of childhood cancer face late effects of their disease and treatment, including neurocognitive impairments, sterility and secondary cancers.

1 in 330 individuals under the age of 20 will be diagnosed with a malignant disease.

Studies show that treatment related out-of-pocket costs add up to approximately 1/3 of after tax income annually which relates to hundreds of millions of dollars on already emotionally and financially burdened families.  This number is significantly higher in countries with a different health care plan than Canada.

Long-term effects of surviving the treatments for childhood cancer can affect these children’s futures.

Childhood Cancer in Canada accounts for less than 1% of cancer cases, and the US about 2%.  It is sad but true when your numbers are that small you don’t get the big research dollars.

In the past 30 years ONLY ONE new cancer drug has been approved for pediatric use.  Many families are fighting for clinical trials to approve the use of cancer fighting drugs that are used in adults but funding is so low.

So it is Childhood Cancer Awareness month and we decided we did not want the month to slip by without doing anything.  There is much to do in the war against cancer and much begins with awareness.  We rolled up our sleeves and went to work… so tho speak. 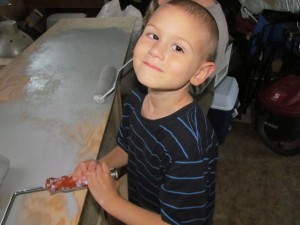 Oh and would you look at all that hair!!!!!   Honestly,  I do take pictures of my other children, if you look closely you can see Josh rolling away.  I did take a picture of him but he was so intent on the job all I got was the back of his head.  As for Hannah I had to put the camera down to help her roll.  Then when Taliah was painting so was I.  I would love to have a professional vinyl sign made but that costs $$$$.   I free handed the sign in pencil first,   and then Taliah and I painted it.   Elijah was content to move the pieces of wood around for me.

Dave still has to put the sign up for us,  it will be 16 feet long and will go on our lawn by the road! 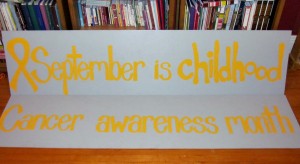 If I have time I may go around the letters in black we will see because we are getting very close to SOMEBODY”S Victory Party!  We were talking about how we had hoped one of the local mayor’s could come to Joel’s party because he too is fighting cancer.  I explained to Joel that he would not be able to come because he was back in the hospital and that he is still fighting cancer.  Joel said, “H hhhmm,   that’s too bad.”  He was quiet for a few minutes and then looked at me and said, “I fought well, didn’t I  Momma?”  You sure did Joel.  Funny his grammar was spot on usually he’d see Me instead of I.

There are endless worthy cancer groups to support,   in the end Dave and I decided we wanted to help support Candlelighters.   We were directly blessed by the work of Candlelighters and if we can we would love to bless them back.  During the month of  September we are selling these lovely necklaces with the proceeds going to Candlelighters.

Now these are smaller then they look I was a little surprised by that,   the circles are 1 inch, and the ribbons are in a gold colour for childhood cancer awareness. They say Faith,  Hope and Love on them.  we are asking for a donation of $10- if you are local and if you are far away we are asking for $12- to cover postage.  Now I don’t have paypal or anything like that but if you are interested email me and we will work something out.

Cancer starts with the transformation of a single cell. We have yet to understand why.  There is much to be done to fight this beast of a disease!!!!