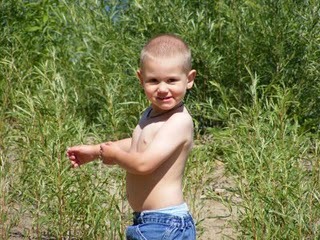 1 year
365 days
8760 hours
525600 minutes
31536000 seconds
A year ago today time stood still, it just stopped.  I remember so many details of  ‘that day,’ the day our lives changed so abruptly. Anniversaries are usually things we celebrate but sadly we all seem to have some dates that as that calendar date approaches we just don’t know what to do with ‘that day.’  Somehow it calls out to be acknowledged yet how?
This week has been a challenging week for me.  As Saturday approached I have been reflecting on this past years and my emotions have been all over the place.  I had expectations of what life would look like by the time this anniversary rolled around.  It is not at all how I pictured it.  I had a nurse in the early days after Joel’s surgery tell me not to worry healing would come it just takes time, her son had a tumor in the posterior fossa too.  I asked her how long.  She told me about a year.  I made the foolish assumption that Joel would be back to his old self in about a year.
It was a crazy thing to think, Joel will never be that little boy again he is a year older and tumor or no tumor he would have grown and changed.
Joel was born weighing 10 pounds and was just always a sturdy boy; 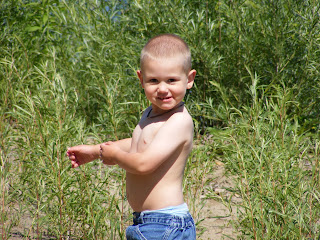 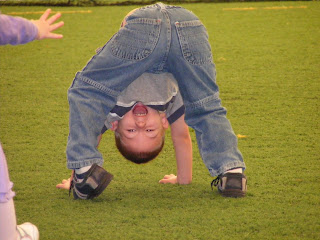 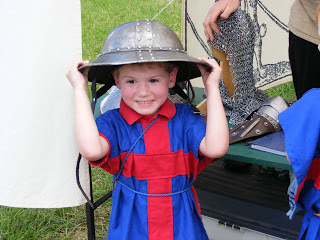 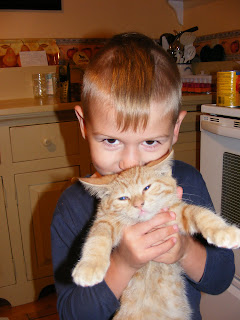 I didn’t take pictures of Joel right after his surgery.  It took me awhile to take a picture of him, but I knew I had friends and family far away that needed to see Joel was okay.  About 2 weeks after surgery I took this one of him sleeping.  This is before the harsh cancer treatment began so he still has beautiful full cheeks, and of course hair all though the back of his head was shaved. 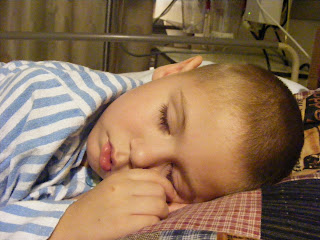 On March 26th 2010 Joel woke up a happy little guy ironically no headache that morning.  Joel had been plagued with early morning headaches that often dragged on through the day sometimes with vomiting.  We had  been to our GP on Tuesday and she was unconcerned and said probably migraines.  That just did not sit well with Dave and I so Friday morning Dave had the day off work, we dropped the other kids off at my parents and headed to the Children’s Hospital.
We pulled into the parking lot and Joel was happy to be there we took one look at his smiling face and decided to pray that someone would take our concerns seriously, as Joel looked the picture of health. Thankfully, God heard our prayer and our young resident doctor had a gut feeling and went with it and ordered a C.T.scan.  Within a short time we had doctors and nurses buzzing in and out of our room, a Child Life Specialist came in the room with a stuffed moose that had an IV attached to his leg.  She explained what the IV was and asked Joel if he could take care of the moose.  Shortly after that he was having his own IV hooked up.
We then had a visit from Neurosurgery they were going to do an MRI and they were talking surgery it was clear we weren’t going anywhere. When they told us there was a mass in the back of Joel’s brain and surgery was necessary and then they told us the risks of surgery, none of which were pleasant, including death,  I remember thinking we just have to get through the surgery.
Now I could write a book about ‘that day’ alone, but I’ll jump to after surgery.  When they told us he was out of surgery and I could go in to see him I was on cloud nine.  Then I walked into the room and saw my little boy whose face was swollen from being face down for 11 hours, he had facial paralysis, his eye was turned in, he couldn’t sit up and his head flopped to one side and he was in pain. We would learn that he lost motor control of his right side, couldn’t walk and he would go mute for a time.  In that moment I was instantly hit with the reality that this was going to be a long road.
This year has been a tough road,  Joel has lost a lot of weight and no longer has a sturdy look about him, but he is a fighter.  He is walking and tries to pick up the pass with a wobbly run. Balance is still an issue for him  The facial paralysis has left, his eye is still a little off but has improved, his speech is still a huge issue for him.  He has to really search for words and mentally this can be exhausting for him.  His motor control has improved but Joel has switched to preferring his left hand.  We would love to see him running without effort and talking with ease, yet we are amazed and thankful for how far he has come.
While I said it has been a tough road it is also been one filled with blessings.  We have been overwhelmed with God’s provision for us. I was rereading some old posts and read about how I likened our situation to being lost in the desert.  I had shared this verse at the time;
I will even make a way in the wilderness, and rivers in the desert.
Isaiah 43:19
Our family has swam and drank from those rivers over the last year.  Those rivers have come from God in many ways, through prayers, visits, emails, phone calls, gifts, help, meals etc.  Thank you to all of you who have through your prayers and support helped pour those rivers into our desert time.
As I look back at those pictures of Joel that were taking in the year or so before his surgery I see my boy who was full of mischief and adventure.  Today a year after I look at my boy and I still see a boy full of mischief and adventure it just comes out a little differently.  Joel has never complained or cried about what was, he simply embraces each new day, how much we can learn from him.
I told Joel that today is one year from when we first went to the hospital.
He asked me, “We sleep there?”
“Yes, a year since we first slept there.”
“HHMM”
“That means it’s Jenny’s birthday you’ve had her for a year.”
“Him a boy!”
“Oops, yes, Jenny’s a boy.”
Here’s a picture of Joel and Jenny one year later! 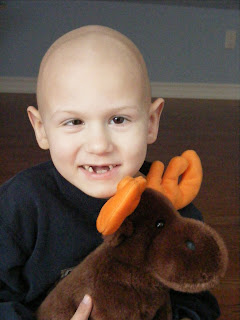 And now for a little fun… I couldn’t let today slip by, but I didn’t know what to do with it.  Remember awhile ago I posted about my word for this year was going to be patience.  I need to be patient with Joel through this recovery process.  Well quite some time ago I googled the word patience and hit images and this is what caught my eye. I finally got around to emailing Kristen and asked her if I could get the necklace with a heart on it instead.  She sent me a picture of a heart that to me looked a little beat up, here it is on one of her other necklaces. It is beautiful!  It isn’t smooth and perfect and I can’t think of anything more perfect to describe this journey with Joel.  So picture the heart with the patience and you get the idea.  I also discovered that she has the capability to fit the kids names all on one necklace.  I have been looking for a long time for a ring or necklace or something that I could get with the kids names or birthstones and she has just the thing. On the top disc she’s going to put the girls names and on the bottom one the 4 boys names.  I’m excited to see them.
Oh yes, I said fun part, well Kristen was willing to help me make this day special by offering one of her beautiful hand stamped initial necklaces to one of my readers. What do you need to do to be entered in the giveaway….
First click the button below and check out all her beautiful jewelry.  I haven’t done something like this in a long time a lot of special days came and went last year and when I told Dave about Kristen’s jewelry he gave me the go ahead as neither of us just go out and spend money here and there.  You might be like me and see more then one thing you think is quite special!!

Then come back and tell me what was your favorite.
For 2 more entries become a public google follower or tell me you already are.
Finally, for another 2 entries take a peek back over our last year and tell me which post meant the most to you.


Contest closes at midnight April 1st no joke and I’ll post the winner on Saturday morning!! (April 2nd)
I want to thank you all for sticking with us on this journey!