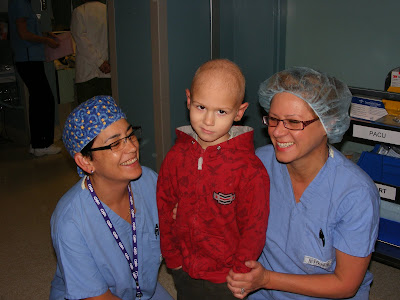 As it is now Wednesday night, you may have already guessed that Joel made it through his last 2 radiation sessions. He is a trooper. After his second last session Joel came home for the weekend and had a great time visiting with some out of town friends. He just wished it could’ve lasted longer.

His last day was a celebration. Joel (with the help of his parents) had made some Thank you gifts for those involved in his care, while receiving radiation.

They in turn had some surprises in store for Joel. They had decorated his bed that takes him back and forth between the 2 hospitals and there were some gifts on his bed too!!! When he got to the General Hospital the nurses there had some surprises for him as well. 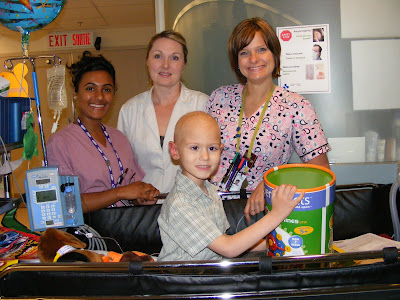 After radiation he received his last dose of Vincristine for this round of chemo. He did well with it and was in a really good mood. It felt like we hit a huge milestone finishing radiation, and it is. Yet there are still many months of treatment ahead of him. Joel’s speech still needs work… as does his right arm…and his balance. His right eye has improved a great deal but it too still needs a little catching up. He still has a long path ahead of him…but he is bravely facing it.

We returned home and had a pizza dinner that Joel passed on, he is still having issues with stomach aches and lack of desire to eat. The next day Dave was off to work, so my Mom came out to help with dinner and the kids as I eased back into my roll at home. Joel had a pretty good day eating and I was impressed with how much he drank in the evening…unfortunately right before bed Joel was sick to his stomach… so much for his dinner.

Gramma stayed until after lunch the next day, and then headed home again. I was on my own for dinner, clean up, and bedtime routine. (I even cut Josh and Elijah’s hair in that mix too!) It might seem funny but after 10 weeks of just looking after Joel and I, taking care of the seven of us is an adjustment. 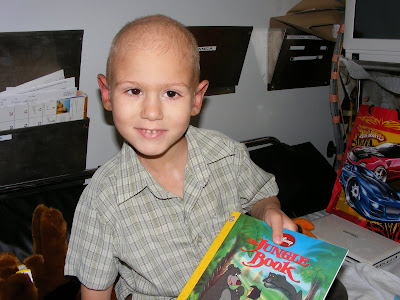 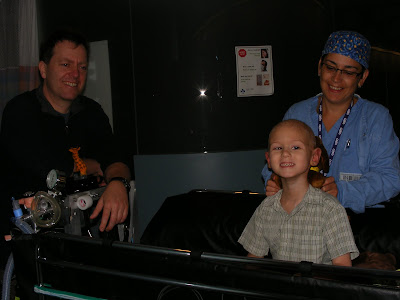 Joel will have to go back to the hospital over the next month for some tests and to have some dental work done but for the most part the next 4 weeks will be a chance to rest heal and strengthen for Joel and for the rest of us too. Only for the rest of us it is more emotional and spiritual rest.

I feel a bit guilty about what I am about to say because it is Joel who is going through all of this but as the one journeying beside him and watching rather powerlessly at times…I find myself relating to Paul,’counting it all joy.’ Again don’t misunderstand I would choose a different path for Joel if I could… but as we are on this path I can see how God has gone ahead of us and cleared the way for us.

Imagine how hard it would have been on Hannah not having her Momma for 10 weeks if she had not been born while we were living with Gramma and Biba and spending about 2 years in their home. Can you imagine being in your sixties and not having little ones running around and then all of a sudden in a time of crisis you are caring for 4 children. How about having your mother in law doing your laundry and asking you to pick up milk on your way home from work. As we spent those two years with my parents we built some incredible bonds that helped carry us through this difficult time.

I know as I have already outlined that Joel is still dealing with some tough stuff but it could be so much worse then it is. I have met children who also have a Medulloblastoma who are unable to have all of the tumor removed…who have feeding tubes…who are mute for months…who can’t walk for months.

And the prayer and support….

On Sunday one of the Moms at church was telling me how her 3 year old daughter prays everyday for Joel. She told me about a day a few weeks ago when she was playing and all of a sudden stopped and looked at her Grandma and asked her, “Have you prayed for Joel yet today?” Her Grandma said, “No I haven’t yet.” Then the little one said, “I think Joel is having a bad day today and we should pray for him.”

Many of you have shared similar stories with me. I know many have added Joel to their daily prayers and that continues to humble and amaze me. No, his journey isn’t always easy and he does have bad days but isn’t it amazing to know that God puts that on the hearts of even his smallest ones. Nothing Joel goes through is a surprise for God he has gone ahead and cleared the path, yes it is a difficult climb at times but He is right there with us.

Once again, (I feel like a broken record…or for you younger readers a scratched CD) I thank you all for your continued love and support, all of your kind words of encouragement and most of all for your prayers!!!

P.S. The pictures are all from his last day of radiation.