Today was a busy day….I had a rough night sleeping last night and at 7am the hospital thought it would be a great time to test the fire alarm. This is not to be confused with the annoying noise you hear at home when you burn the toast. This is an equally annoying noise that can go on for several minutes (about ten… no exaggeration…which I am prone to I almost wrote 15 minutes) at any rate it is a very unwelcoming way to start ones day.

As much as I tried to ignore the fact that the alarm had gone off Joel was not going to ignore it. He told me he heard a man say there was a fire and he wanted to go see it. (When they test the alarm a monotone male voice comes on and tells you in French and English that they are testing the fire alarm. Once the insanely loud noise stops binging the same monotone voice comes on to tell you that the test is complete.) Joel was definitely ready for his day, so up we got…went to the bathroom…ordered breakfast…ate breakfast… got dressed and started our day.

We went to the play room and played until it was time to go to speech. Joel had another good day in speech with Adrian. I think those two guys are becoming good buddies. Before going back upstairs Joel and I stopped at the coffee shop so I could spoil his lunch with a donut. Once upstairs we ordered lunch and headed back to our room.

We were joined by Lenae who came by for a visit. Joel wasted no time as he wolfed down his donut while Lenae and I visited. She also informed us that Sergeant Bamber (Murray …her husband) was going to be able to come by for a visit and would have his police car with him.

Just after Lenae left Gramma, Biba, Elijah, Taliah, Joshua and Hannah all arrived for a visit! Off to the play room we went only to be joined by Sergeant Bamber…Murray :). Murray had a bag of all sorts of things in it but the most prized possession was the Junior Constable badges!! All the kids got one and then outside we went to check out the police car. Well, I think Joel thought he was the luckiest kid in the world… he got to sit in the front seat of the cruiser but he didn’t sit shot gun he sat in the driver’s seat. Woohooo!!! The other kids got to hop in too. They got the lights flashing and just before he left Murray did a short bit with the siren.

Once back upstairs we headed to the play room again when we ran into the rehab team who said…..wait for it…..WE GET A WEEKEND PASS!!!!!!! There are a million (okay probably a slight exaggeration) rules to be obeyed for going home, but, we are going home. Of course it is just for the weekend, I think it will be so good for him to be in his own space eating home cooked food etc. I will bring the camera along and hopefully get a ton of pictures. It also gives me a chance to pull together school work for the kids to work on while I am away. If this goes well than we can hopefully make a habit of going home for weekends.

Now this all sounds really good and it is but into every life a little rain will fall. Monday is Joel’s first day of radiation and they can’t fit him in until 1 pm and he has to fast. Making any 4 year old fast is never a good idea and making a 4 year old who has the capability of erupting like a volatile volcano is a really bad idea. Frankly, I have no idea what I am going to do for 6 hours with a hungry/ thirsty little guy. He has the same time slot for Tuesday. Now there is a little girl who’s radiation is ending on Tuesday and we are praying that they move Joel into her slot there is no reason why they can’t but you never know.

So I am calling on all of you guys to pray for Joel to get the earlier time slot and miracles can happen so why don’t we all pray that over the weekend something happens and they realise they have an opening Monday and Tuesday morning that they can slide Joel into!!!

We also found out that they are moving Joel into a rehab room tomorrow morning. Our roomate Olivér is moving to a different floor for long term care. Olivér has been here since January 2nd and in his first 7 weeks had 7 surgeries. He is just 3 years old, he speaks only French but sings everything, yesterday he was singing Felice Navida. He really does sing everything from Christmas Carols to Depeche Mode (his Dad is into 80’s tunes.) I am going to miss his sweet little voice.

Adrian came over in the late afternoon to hang out with Joel and they watched a movie together. Adrian is getting a weekend pass too, I am excited to see them after a weekend home I am guessing it will be good therapy for both.

How many of you remember this poem?????

This poem has always been a comfort to me and right now I know I am being carried. The other day Joel and I were trying to keep ourselves busy when we went to the Hospital gift shop and I frivolously spent $6.99 on a ring. 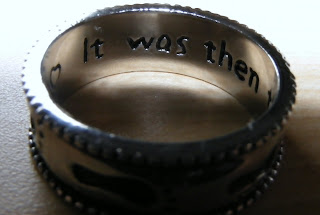 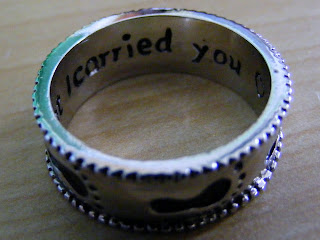 It is a good reminder for me even on the tough days that we are being carried through this time. I want to thank you all again for your love and support through this and your prayers are part of the carrying us process. It is such an important thing your prayers we feel them, love them and continue to request them. God Bless you all! 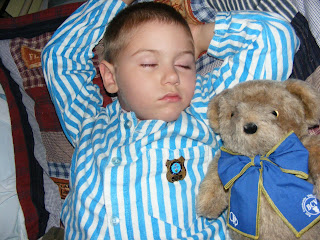