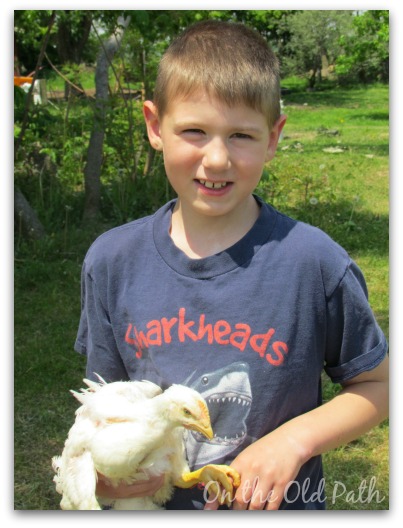 To those of you who have been waiting on a Joel update it is finally here and there is much to rejoice over.

That being said he is growing!

Not only that he has spine growth.  Often times when the spine is radiated, there is little to no growth.  Joel’s growth is not steady, it is trying to make up for lost time.  Joel was a BIG boy at 4.  He stopped growing during treatment by 6 he had only grown 1/4 of an inch in almost 2 years.  It wasn’t really all that noticeable to folks because Joel went into cancer treatment with a height that was off the charts.  Once treatment ended he grew a wee bit and then just fell off the charts.  Joel is not staying on a given trajectory but instead is climbing.  I think he came back on the chart at about the 10th percentile, in April of this year he was in the 49th percentile July 2nd they told me he was in the 78th percentile. His doctor has said they can not predict what his growth will do they have no idea if he will completely regain what he lost.  Still this is encouraging news despite the fact that I waiver back and forth about the injections.

He had his latest MRI in June and we just got the results that all is clear.  He now moves to once a year MRI’s… wow!  Audio test results are holding their own, Joel has very minimal hearing loss in the very highest frequencies which does not hinder day-to-day life at all.

The hard part is explaining his neuro-psych evaluation, that is where we get very little good news.  He was tested earlier than protocol called for because we had seen some declines.  When he was tested his results did show some slight declines but they were not consistent and were rather minimal so at this point they were not even labelled as such.

Joel remains developmentally disabled.  He can count to ten sometimes, and he cannot read.  Sometimes he can spell his name.  To be frank I could go on for awhile telling you what he can’t do, and what he struggles with, but instead let me tell you what he can do.

A child who has scored in the 1st percentile for memory (believe me this is one time you don’t want to be #1)  has put a Bible verse to memory.  He sang the chorus from, ‘Go Tell it on the Mountain’ to me tonight!  He also ‘read’ Samuel a story before bed.  When it comes to his memory Joel scores in the 1st and 2nd percentile in all areas of evaluation but one.   He scored in the 86th percentile in his ability to retain information told in a story form, they can not explain this, God has created the mind in ways we cannot begin to understand.  So he told Samuel a story in great detail as he flipped the pages so Samuel could look at the beautiful pictures.

Joel is hilarious, he has a fantastic sense of humour, he regularly makes us laugh.  He and Joshua will often dress up and do an impromptu performance. 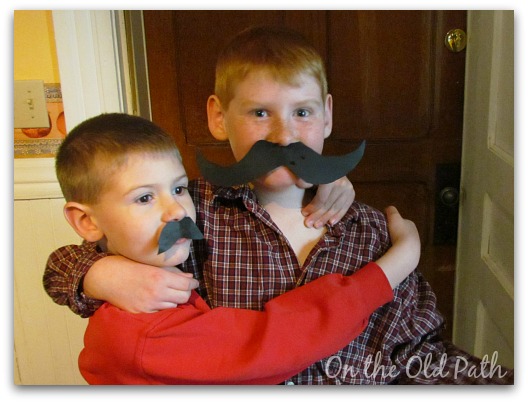 He has an incredible imagination that seems to have an insatiable appetite for adventure.  On paper they tell us his brain is not functioning to the level it should but we see the wheels turning and know his brain is working so hard. 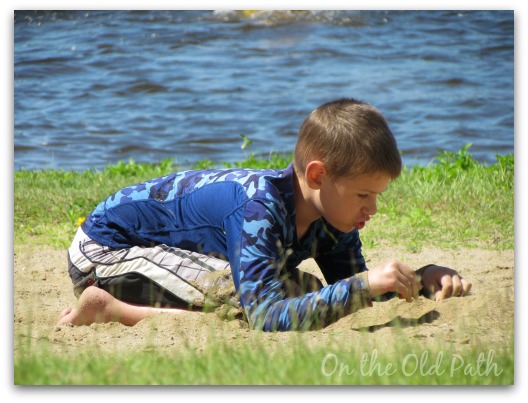 He wants to help, and he likes to be busy assisting Dave if there is a building project going on.  It is so encouraging to see him follow along behind Dave. 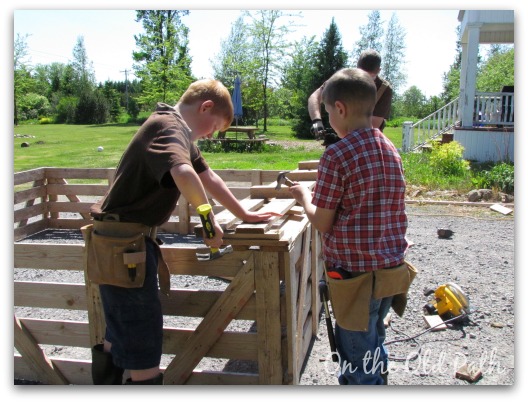 This was not always the case.  Oh sure, Joel showed his love for me but he was Daddy’s little boy, he followed him everywhere, he wanted Daddy to do it, when he needed help… and then cancer raged into our lives and it robbed that relationship.  The only way Dave and I can figure it is that it had to be extremely confusing and scary to go from a little boy who could run faster than his siblings, climb a tree like a monkey with endless energy, to a little boy who could not move his right arm or leg the way he wanted it to, to not be able to hold your head up or even sit up properly, to knowing what you wanted to say but not being able to make the words, all within 24 hours.  Stuck in a room with machines and people that he didn’t know and instead of staying and protecting him or even just picking him up and running out of the building with him, his hero, his Daddy kept leaving.  Dave had to, he had to look after the other children, he had to work.  Joel went very much into himself, we saw episodes of rage that I did not think were possible, we were told not to worry it was normal, but it was anything but normal.  Joel wanted me for everything and he gave the cold shoulder to Dave and it broke Dave’s heart. 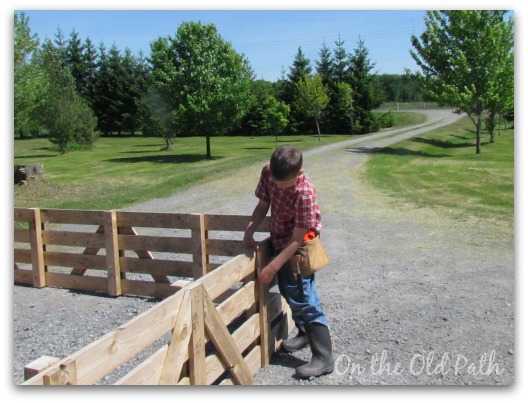 Dave would refer to me as the ‘Joel whisperer’ because I could calm him down or get him to listen when he would refuse to tune in to Dave.  Quite frankly, it was just extremely difficult to see this amazingly tight relationship crumble, with no real explanation.  Dave says he thinks Joel saw me as his lifeline and he clung on.  It is over 4 years from that day when our lives turned upside down.  Things may not be perfect, but Joel sneaks into the car to stow-away with Daddy when Dave has errands to run.  At bedtime it is Daddy who Joel wants to read to him and pray with him.  It does my heart good to see the healing happening. 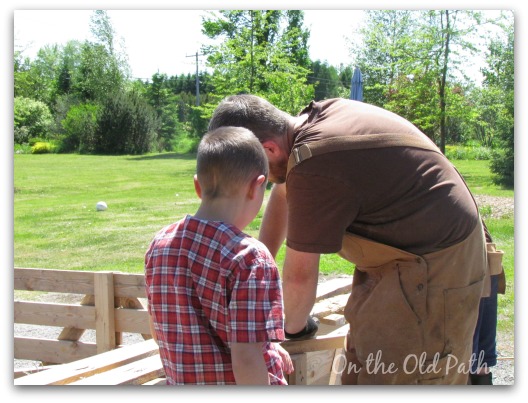 Joel is creative, he builds with Lego, he makes forts.  He has begun to draw, and there is always a story that goes with it. 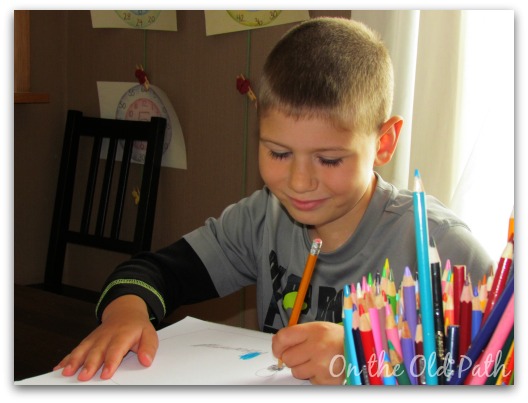 He can cook and he enjoys being in the kitchen helping.  He makes french toast and scrambled eggs by himself, and will often make some for whoever is hungry! 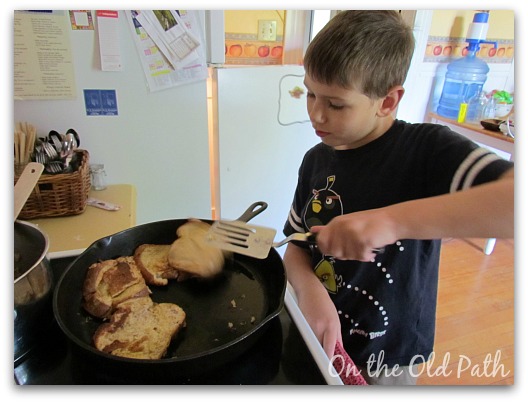 He is running and jumping perhaps not as well as his peers but he can do it nonetheless.  Remember he could not even sit up let alone stand, his balance has improved greatly! 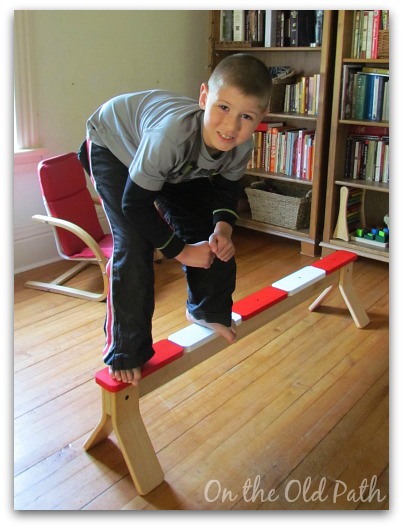 He is brave and up for a challenge, and likes to be active, every night he asks us, “What are we going to do next day?” 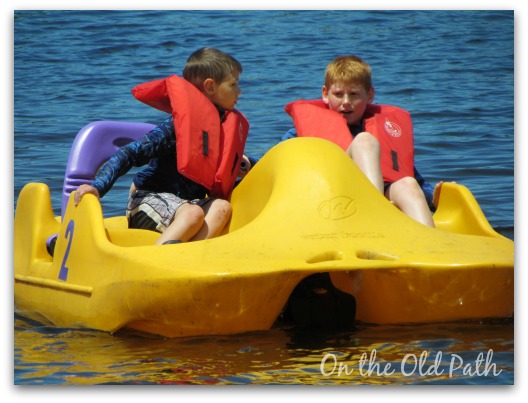 Joel loves animals from the ever so small right on up to the huge!  He savours any opportunity he gets to be the one to open the chicken coops up in the morning.  When our garden is planted we do not let our chickens have complete range of the yard, so if one escapes the fenced area he delights in catching them.

He is a sweet brother and will give rides to his younger sister and her friends. 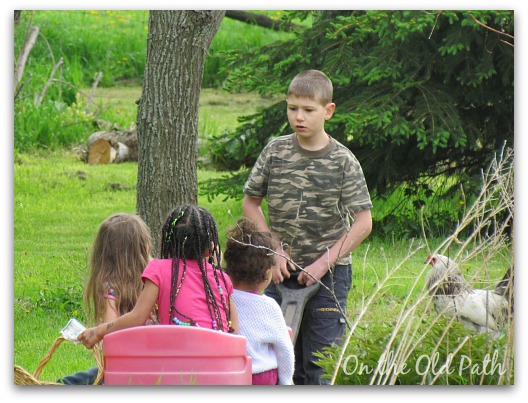 He is just like any other boy and likes  to wrestle with his brothers.  He has been through a lot but it looks like Joel may just surprise them all and come out on top! 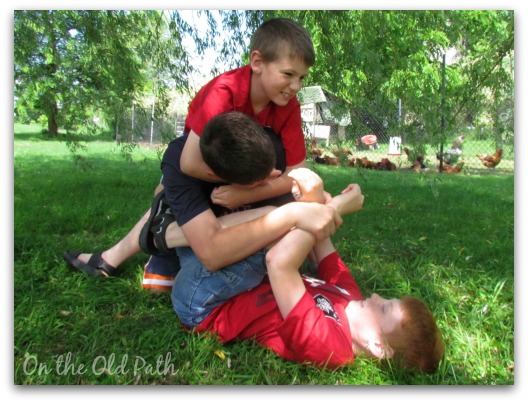