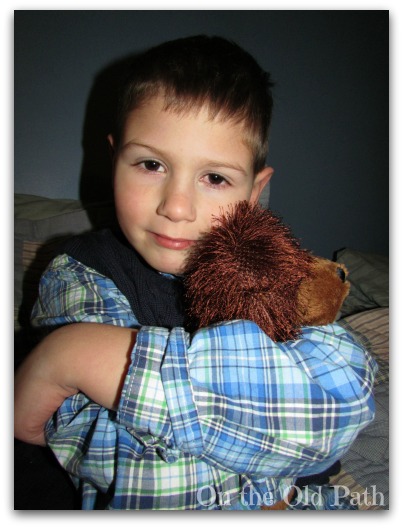 You know there is always two ways to look at something, and sometimes even more than two.

Last night as I tucked Joel in to bed he looked at me and said, “I can’t wait for tomorrow!”

I always try to prep him the best that I can.  We drew pictures, we talked, we watched videos from the product website.  Yet I still wondered just how much he grasped the scale of how things were going to change for him.

Hey, he has been through brain surgery and the upward battle of learning to walk and talk all over again, not to mention doing battle with cancer via 30 rounds of radiation and over a year of chemo, this step is small.  Yet it is still big, daily injections for years to come.  Joel is getting older and starting to see how different he is, that his friends seem to have endless energy, they don’t struggle with speech, and this will just be one more way in which he is different.

Remember I said there is more than one way to look at things.  Joel was not crying about today, he was looking forward to it.  He saw it like he was some kind of hero, who was going to get special injections that would help him grow big and strong, sounds like something right out of a sci-fi novel.  This is still a hard pill for me to swallow,  here we are trying to grow as much of our own food as possible, cloth diapering, non-vaccinating, purging as many chemicals etc. from our lifestyle as we can, and in the last 3 years we have pumped this poor kid full of chemicals and toxins to save his life and now we are giving him synthetic GH (Growth Hormone).

We have researched it, and weighed the options and we have chosen this path.  It isn’t easy, I remember a lady saying to me “it must have been a tough choice to radiate his brain”, umm, we really weren’t given a choice.  This one is harder, we do have a choice, Joel not growing, doesn’t seem like an option, natural remedies, haven’t come across any reliable studies on that.  I know there are options to naturally increase the release of GH, but if you aren’t making it you can’t release it.  Even then the claims are a bit sketchy.  Have I ruled the natural route out… no.  Currently, we know that the GH we are giving him is successful.   Long term side effects????  The worst thing you can do on this path is second guess the decisions you end up making.  We make the best decisions we can with the information we are given at the time.  It doesn’t mean that we can’t change our decision if we are presented with new information. 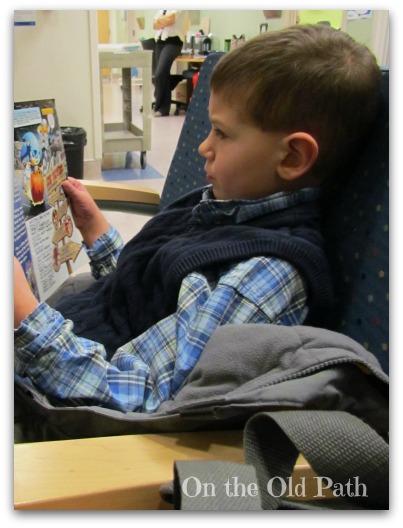 Joel was up early dressed and ready to go.  He spoke politely to the nurse doing our training session, which is really neat because for the longest time if you were medical staff there was no way he would talk to you, selective mutism all the way.  We saw Molly Penny, the hospital clown, and he still won’t talk to her, any of the staff that have been there since the beginning he still has a hard time talking to, yet he was glad to see her.  We also saw Dr. Vassilyadi, pretty amazing 3 years later and he still remembers Joel’s name.  Joel shook his hand and smiled.  He was a bit distracted because we were headed downstairs to the hospital’s pharmacy, and our nurse was leading us to the staircase, and Joel began to panic.  He has depth perception issues and open staircases freak him out.  I quickly explained to our nurse that the stairs weren’t going to happen and he happily hopped onto the elevator.

After we picked up his prescription we headed back to her office where we got Joel ready for his first injection.  He did great and bravely pushed the button for his injection.  He flinched and got teary eyed.  After that Joel stopped talking that seems to be his coping mechanism for tough stuff.  The nurse felt bad because Joel seemed so confident she hadn’t really gone over  what was going to happen with him, and felt she had let him down.  Honestly, I don’t think she could have done anything more for him, experience is what will make it better at this point.  Anyway, she gave him a stuffed dog, which was sweet but he already has an army of stuffies which I am always trying to purge. 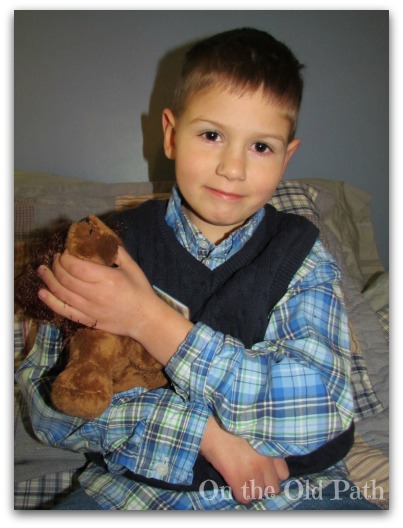 On the way home we talked about what had happened, I told him that with time he would get used to it, to that he replied, “I will never get used to that.”  I also mentioned how it said that we could give the shots in his thigh, upper arm, tummy or bottom,  at that Joel looked at me rather astonished and assured me, ‘we will never do it there!’

I asked him if he remembered who the man was that shook his hand.  He didn’t so I explained that Dr. Vassilyadi was the neurosurgeon who removed the tumour from his brain, his mouth fell open and his eyes got big, “That was him!?!?!”

Today felt much like the beginning of a new adventure.  Once again I must confess I know not what the future holds but I am so glad to trust in the One who does know the future.  He has a plan and a purpose for Joel’s life and I continue to lay my son at His feet.   There are times when I wish I knew the outcome, I wish I could have a glimpse into the future.  While driving home I heard the main song from the movie Fire Proof on the radio, and I could not help but think how applicable the words were;

And so we wait…