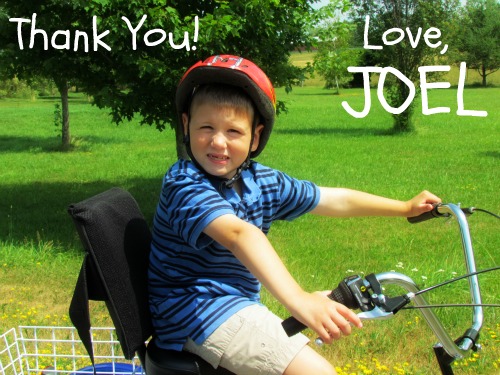 It has been a long time since I have given an update on Joel.  Which I guess is a really good thing.  I can remember the days where the updates came daily, and for some of you even hourly.  Some of that seems like a lifetime ago, and some of it just a moment ago.  Joel is doing well.  If you were to meet him and did not know his history at first glance you would think he is just like any other, almost 7-year-old.  In many ways he is, he likes to pick up frogs and toads, to build with Lego, to have a straw in his drink etc.  If you look a little closer there are things that still set him apart.

He still tires faster than your average kid.   He has started to run, but he does not have speed, stamina or balance like other children his age.  He spills drinks, it takes an effort to bend over and pick more than one thing off the floor at once.  Shoes are a challenge but he does it.  He still does not have the fine motor skills to tie a shoe, button a shirt, or zip up a zipper. (We love Velcro.)  He is working at cutting his own food at the table, and makes his own bed.  Scholastically, ‘challenged’ is the word that sums up that area of his life but he is determined and he works hard.

We have been told through therapy that Joel qualifies for funding for a computer as he does not have the fine motor control back yet to write with his right hand.  He is learning to use his left hand but he takes a long time to print, ‘Joel,’ and even then it is barely legible.  He can type his name fairly quickly though.  The problem with this particular grant is, that it is for a computer as a writing apparatus, and to qualify Joel has to be able to do certain things.   He needs to know all the letters of the alphabet by name, that is an abstract thought for Joel, he knows all the letter sounds.  The sounds have a meaning and he can relate to that.  With much work Joel has learned the names of each letter.  The next challenge is that Joel  has a major speech issue.  He struggles with pronunciation,  word finding, fluency of speech, even regulating his breathing when talking.  Joel can see the letter ‘T’ and know it is a ‘T’ but says ‘R.’  However, if you show Joel the alphabet and ask him to point to a letter he will consistently get the right letter.

The problem is when applying for the grant they look at just one part of Joel.  They don’t see him as a child that not only has a motor control issue, but one with cognitive issues, and speech issues.  A bit frustrating but we press on.

As for speech Joel has many grammar issues too, he uses him and her in place of he and she.  He struggles to find words constantly.  I think I have mentioned before that Joel has taught us that words are stored in your brain in groups.  If you can’t grab the right word then your brain will grab the next closest one.  ‘Ask’ and ‘tell’ are stored together,’ today’ and ‘tomorrow’, ‘husband’ and ‘wife,’ these are some common ones Joel mixes up.  When he says the word, though, he thinks he has the right one.  If you offer him the pair, “Did you mean husband or wife?”  He can grab the right one as soon as he hears them together.  He consistently used today for tomorrow, to compensate he now uses the term, ‘next day’ instead of tomorrow.  He will often switch to the negative and say we shouldn’t instead of should, but he really means should.

For the most part we are very used to the way Joel speaks and can follow along.  However for folks that are not used to him it can become confusing rather quickly, and pretty frustrating for Joel.  Because Joel’s issues are very rare, there are not tonnes of children with Posterior Fossa Syndrome PFS (side effect from his brain surgery),  his therapists have no idea how successful treatment will be, but we keep going.

We headed to CHEO to meet with his Oncologist last week, things are looking good with Joel. 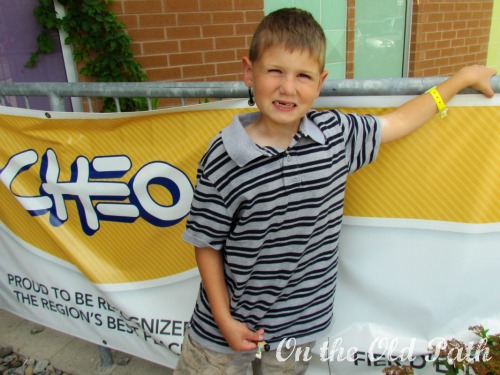 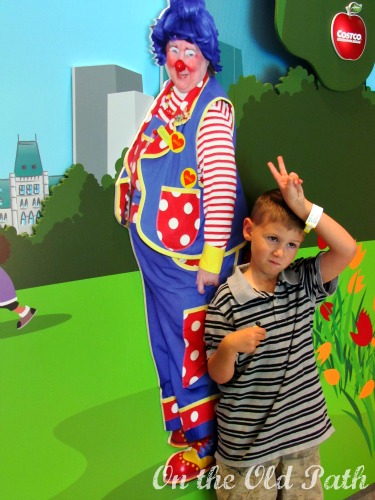 We snapped some silly ones when we were there. 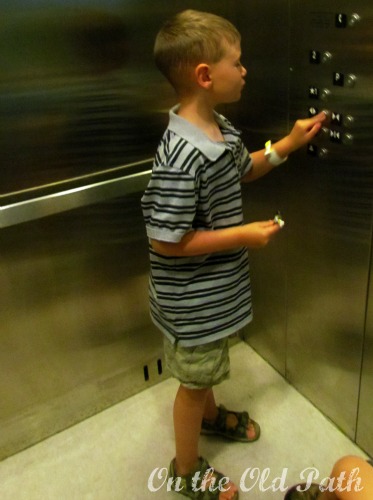 Unfortunately, the Oncologists are of no help with the PFS; we are pretty much on our own dealing with it.  From an Oncology stand point Joel is great.  Clear scans, clean blood work, the picture of health.  So much so they said we will see you in 6 months!

My Mom right away said, “Oh, that is fantastic!” In my head I said,  “Ummm, yep it is.”  But my heart says, “6 months there goes my security blanket!”  I know it is a good thing but sometimes waiting three months for a MRI seemed long.  Every time he falls down I assess the situation ‘was that a normal stumble??’ (This with a child with balance issues, a bit crazy on my part) Every headache I question, I don’t panic but I make a mental note of it.  Learning to trust all over again, on another level.

Joel has started a new thing, after surgery one of his side effects was some facial paralysis. Well, sometimes that same side of the face is a bit, for lack of a better term, droopy.  I have no idea what that means, if it is just weakness or what, but it is something else to keep in prayer.

I think the best thing about Joel is that 99% of the time Joel feels like a normal kid.  He knows there are things that are different about him that he struggles with that other kids don’t struggle with, yet he doesn’t let it get him down.

A Big Thank You

Last month we held a yard sale and BBQ to raise funds for a special bike for Joel.  Well, Joel would like to say a big THANK YOU to everyone that donated, shopped, and helped out.  He is the proud owner of a beautiful blue bike. 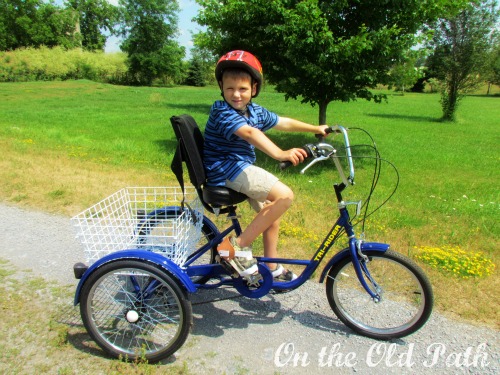 It is a bit big but the next size down was too small for him.  He will be able to use this bike for a few years as he has room to grow another 6-7 inches in the leg before he will out grow it.  I even got a short video of him working hard pedalling away!  So proud of him, I may have listed a lot of areas Joel still needs improvement, but he has come so far!!

It is our hope and prayer that in a few years time Joel’s balance will be at a place where he can ride a regular bike, when he out grows this one!.  For now he is loving his new bike that makes life just that more accessible!