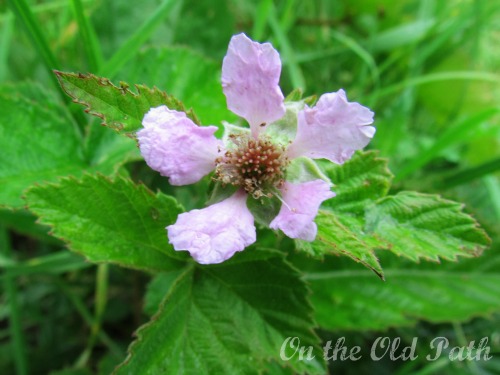 I know I have been missing from around here.  I find it hard to believe that Father’s Day was my last post.  We have been very busy and hopefully I’ll soon have some new posts up describing much of what we have been up to.

Today I wanted update you all on the garden…

I had originally planned on posting weekly updates on the garden, or at least taking weekly pictures and posting a month in a glance.  Somehow I find myself at the end of June and no pictures taken.  So… I grabbed my camera and headed out to take at least the end of the month pictures.  We have two main garden areas.  The first garden is going to be our blueberry bushes and strawberry patch.  ‘Going to be,’ our the operative words in this phrase.

Our blueberry bushes were barely surviving so we transplanted them and they seem to be doing much better. Dave got this garden all ready to go and the strawberries in but as we were running out of time to get things into the other garden, we decided to plant the rest of the garden with some of our other plants that needed to get in the ground.  Meanwhile, Dave was also busy getting the second garden ready to plant. 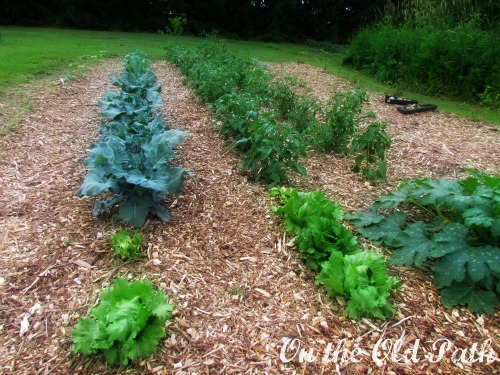 In this first garden we have the blueberry bushes and strawberries on the far-side.  There are 3 different varieties of tomatoes, zucchini, broccoli, cauliflower, cabbage, watermelon, sunflowers, red and green peppers, carrots and head lettuce. 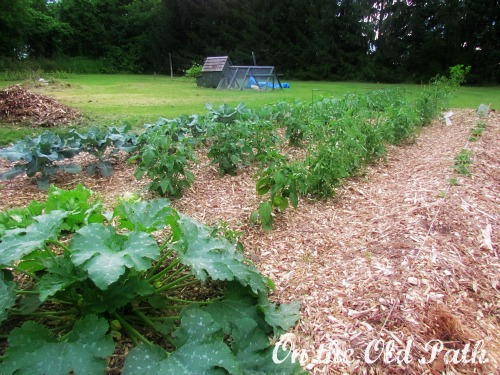 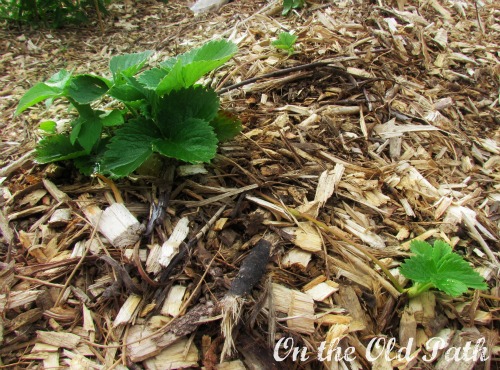 Happy to see the strawberry plants sending out some runners.  We have put a pot with some soil in it under the first runner.  We need to do this with the others and then we will transplant them. 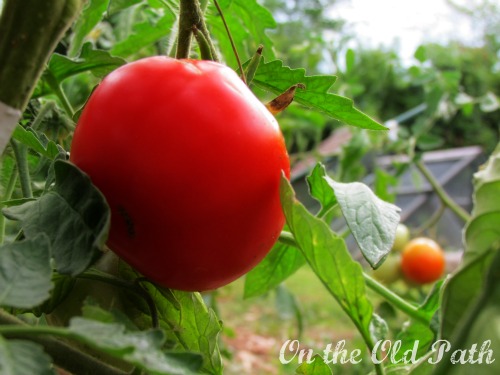 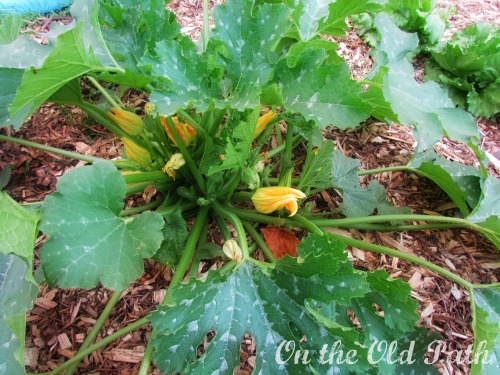 Here we have a side shot of what will be our main garden.  Currently it has 2 different potato varieties.  Dave experimented with two different methods. 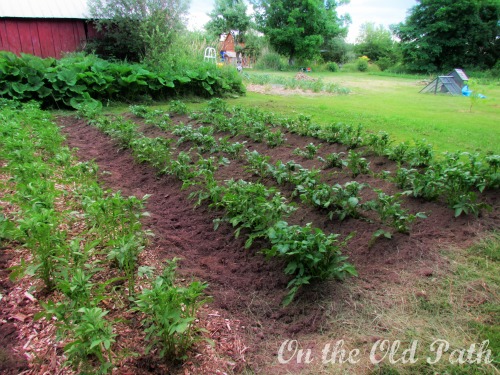 This is a look at the whole garden as you can see we have lots of work to do to finish it up.  It has the potatoes, some onions, corn, pickling cucumbers, english cucumbers, and celery.  This is our first year getting the large garden in.  There are so many things that I forgot, I had wanted to plant peas, beans and kolrabi.  This is very much a learning year. 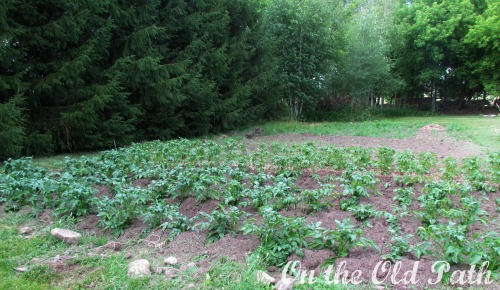 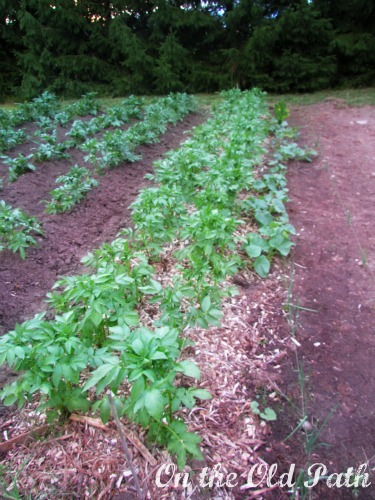 Dave pruned back the grapevine almost to nothing it isn’t as big as it was last year but it is heavy with fruit. 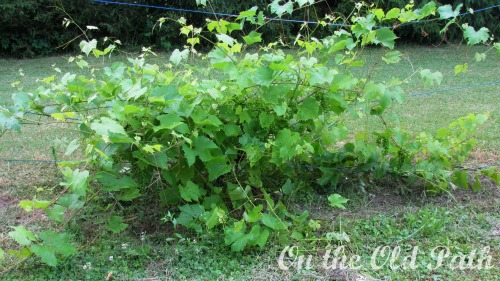 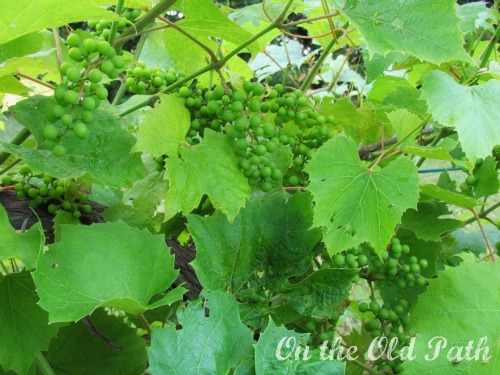 We also picked up a seedless variety and it is coming along.  I am not expecting too much from it this year but there are grapes growing. 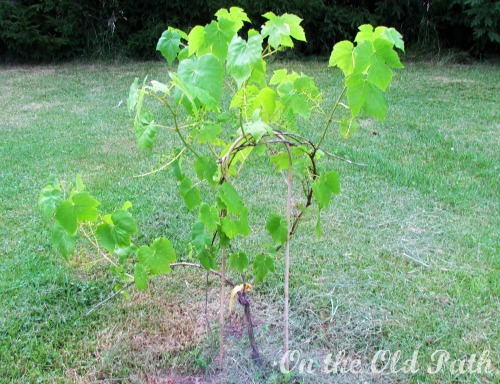 Dave propagated a few new vines from our original, two of them seem to have taken. 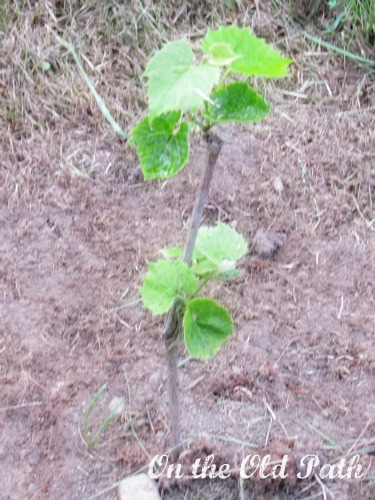 Bathes, boots, and ready for bed… 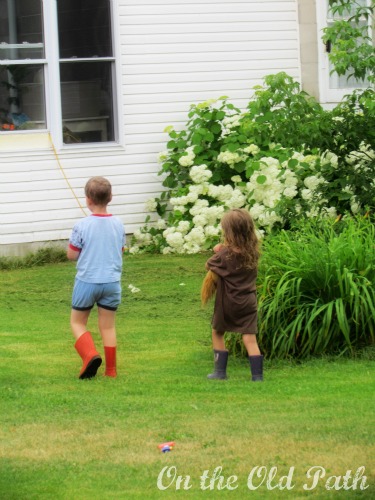 Last fall we needed to plunk our garlic in somewhere and we placed where we are hoping to expand our raspberries and blackberries.  The garlic seems to be doing well and will probably be harvested soon. 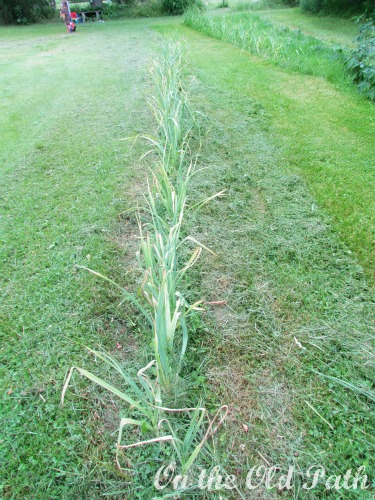 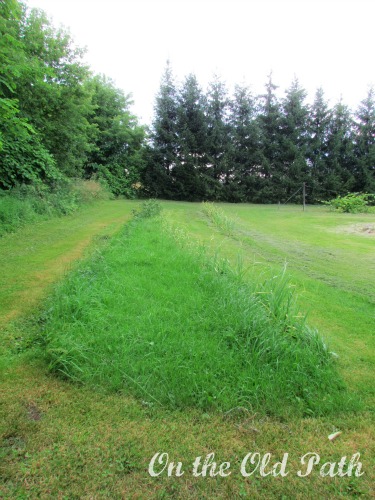 I have done very little with my herbs as well…  there seems to be a very long list of things to do.  Even though we forgot things, didn’t plant enough of others, have yet to fence anything… it still feels good to have taken as many steps as we have so far and there is still much time before the snow will fly for us to get more done.

Some of you might remember back in May I posted about watching the documentary, Back to Eden.  Dave and I really connected with this movie and we have begun implementing the wood-chip method.  So far we are extremely pleased with the results.  The ground holds it’s moisture and weeding has been almost effortless.  Check out this film if you haven’t already.