You are here: Home / Barnyard / Joel & an Old Friend 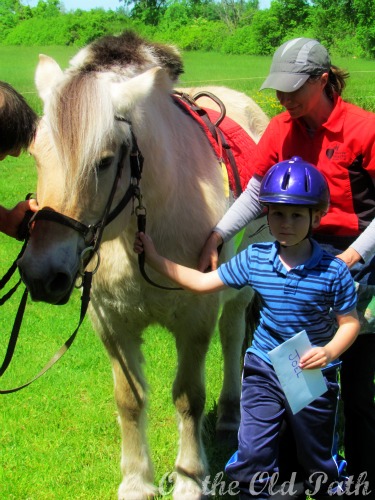 Some of you may remember that last year Joel was fortunate enough to participate in Therapeutic Riding Lessons.  He loved it, and was some disappointed when the cold weather rolled in and we told him that Odee needed to have a break through the winter.

Joel never forgot his friend over the winter, often he would ask me questions about Odee, “Momma do you think Odee dreams about me?  Do you think Odee misses me?  When can I see Odee again?”  One time when we were driving in the car Joel saw someone riding their horse in the winter and Joel said, “Poor horse, they aren’t giving him a rest for the winter!”

Just a few days ago Joel said to me, “Momma, you said I can see Odee when it’s warm, and it’s warm.”  I told him he was right and he had four more sleeps to go.  His eyes lit up and he was so excited.

Wednesday morning came and he bounded into my room to tell me it was the day we get to see Odee.  Joel climbed into the car a half hour early and insisted on waiting in the car for me to get ready.  On our way to riding  I had the radio on, Joel had the window down and I could see in the rear-view mirror his hair blowing.  He had his hand out the window and ‘Yahooed.’   I was in awe of the gorgeous countryside with its lush spring greens when I heard these line from a song on the radio, “This is where the healing begins, oh, This where the healing starts…”  I kid you not.  It hit me so powerfully.  I know in many ways we have already seen so much healing but it was like God chose that moment to remind me He is far from finished with the physical, emotional and spiritual healing that He is working in Joel and our whole family. On the way home I stopped and snapped a picture of where I heard, ‘where the healing begins’ 🙂 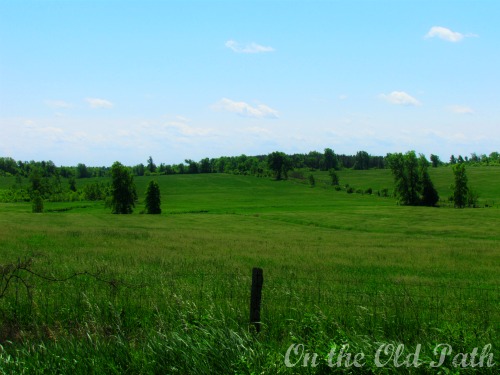 Last year Joel was shy and was not very confident about talking, when we arrived and were greeted by some of the wonderful volunteers Joel said “Hi,” right away.  He had one thing on his mind though and that was seeing Odee, he could hardly wait to hop on! (I apologise for the crazy amount of pictures that are about to follow if you only knew how many pictures I took and didn’t post you’d be impressed with how I restrained myself.) 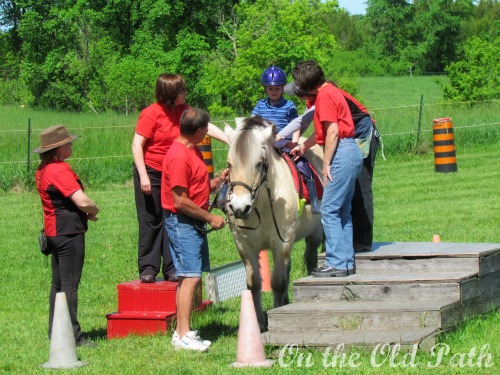 As you can see by the amount of folks in red that they are extremely careful, and there is no way Joel would ever get hurt!  We are so blessed by the wonderful team at Brave Hearts! 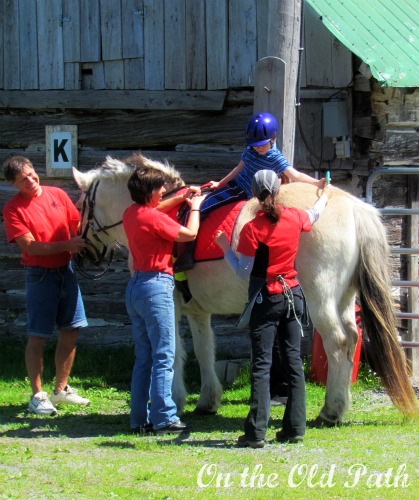 At riding it is so much more than just getting on the horse.  They move at Joel’s pace, and add in so many games that help Joel with stretching, balance, cognitive skills, letter recognition and sound… I could go on and on.  Here he is stretching to grab a ring that he later dropped on to a peg type thing. 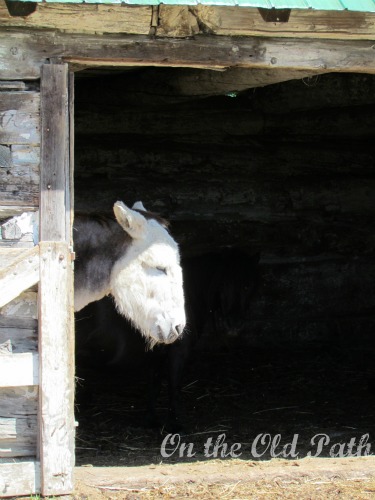 Had to grab a picture of Taco Bill standing there I love the contrast in this picture.  If you look closely in the picture you’ll see Taco Bill is not alone. 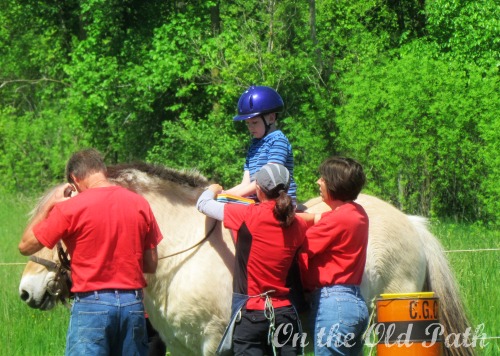 Here Joel is looking at a book!  Personally I can’t think of anything better two of my favourite things together, horses and books, sweet!  Not to mention Joel! 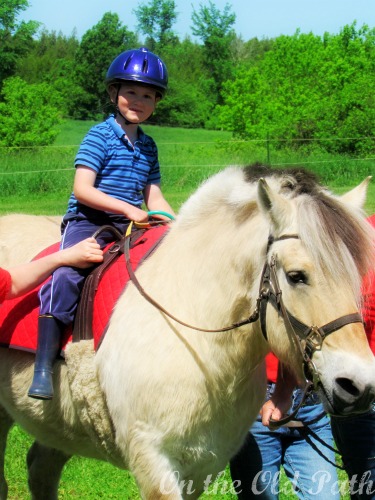 Now that, is one thrilled little boy! 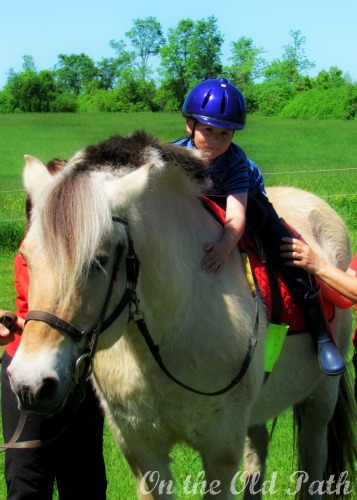 A big hug for Odee, Joel was looking forward to doing that for a long time!

During one of the games Joel rode over to the mailbox and there was mail in it for him!  Riding might be over but Joel always brings some apples along and loves to feed the horses and a few other farm friends.  I think in total Joel stopped to feed eight different friends and I had pictures of him feeding all of them! 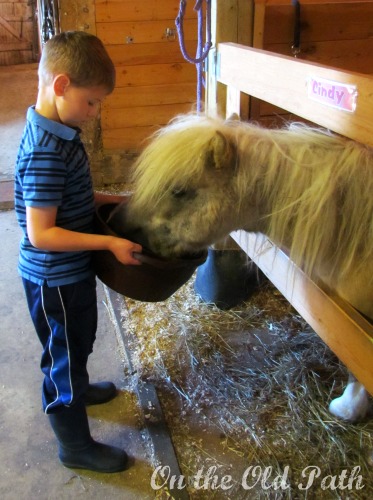 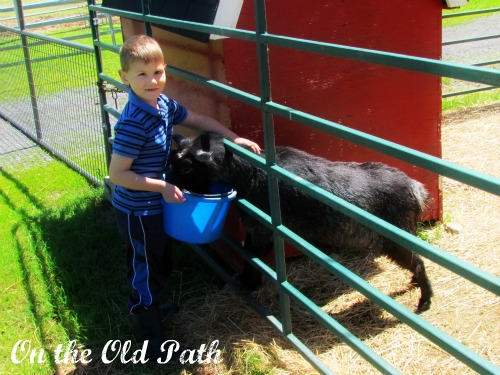 See my restraint!! I am an amateur film maker, that is an over statement.   I am not even an amateur I am simply someone who knows where the video clip button is on my camera here is a quick clip of Joel feeding Odee after his lesson.

I have a request to make, Joel has his first MRI without sedation tomorrow.  Joel has had more MRI’s than I can count but he has always been asleep for them. I have prepared him the best that I can, but it is still a 90 minute MRI and that is a long time for a little guy to lay still in a ‘tunnel.’ If you could pray for him to be relaxed and that the time would pass quickly for him. Could you also pray that they are on time or even running a little early, his MRI is at 2:45 and then we need to rush home so that he can participate in the Relay for Life. Thanks everyone! 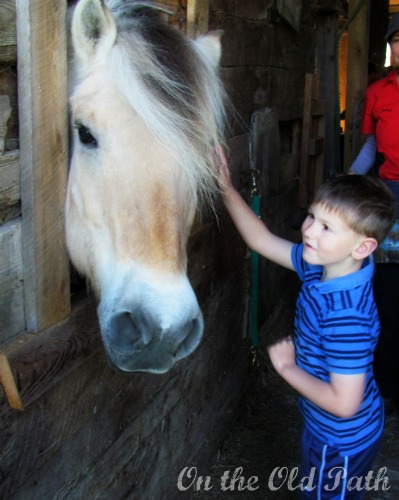