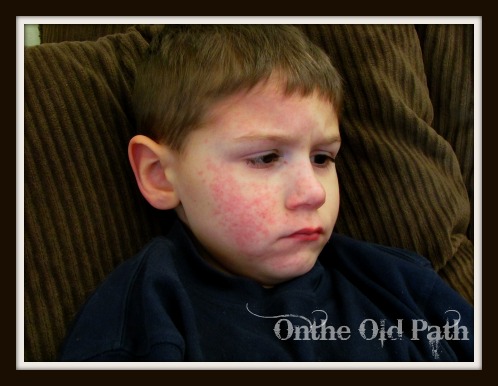 On Monday Joel, Samuel and I headed in to therapy.  My Mom agreed to watch Samuel while Joel was at speech therapy and physio. His sessions went really well, it is fun to see him working hard and having fun.

On Tuesday Elijah and Dave headed off to the Orthodontist and then one of Joel’s therapists came to the house.  And of course, we had to have some Valentine’s fun. 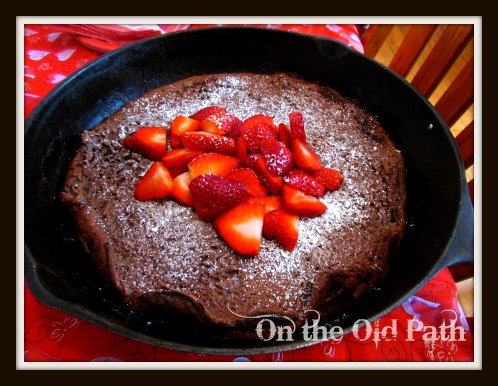 Wednesday my sweet Samuel turned one, but it was a busy day. 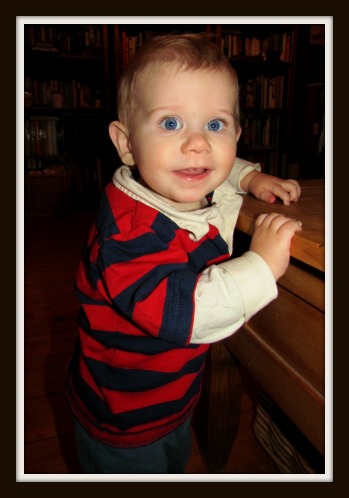 We headed off to the dentist Joshua, Joel, Samuel and myself.  I am seriously considering finding a new dentist.  The work she does is wonderful however… you can get in easily for a cleaning but for dental work that is different.  Months and months ago both Joel and Joshua had a small cavity.  They booked the boys appointments 3 months down the road.  Joel was scheduled in at the hospital for something, it might have been his port removal, and I had to cancel the boys appointment they could not fit them in again until February 14th!! Fine, we will take what we can get, oh and yes it will be with the new dentist that our regular dentist has just hired on.  Fine.  We go in, and while Joel does not really like medical staff he was happy to be at the dentist.  He did not speak to them but he smiled and nodded when asked a question.  He hopped up in the chair and did not even flinch when they gave him the needle (can’t say the same for Joshua).  Once the freezing starts to set in the dentist tries putting this huge thing in Joel’s mouth to keep it open.  At this point I say, “Oh yes, Joel has a huge gag reflex.”  Joel is gagging and gagging, he tries to drill and again Joel starts gagging.  The dentist says, “Well, we’ll just wait a minute or two and try again”.  Again he tries and again Joel starts gagging.  Then he says, “We will have to try again another day” and mutters something about if he is in a better mood it might go smoother.  What?  he was in a fine mood, he just didn’t talk to him.  I asked the assistant what they would do differently next time.   I said Joel wasn’t being difficult, he has a gag reflex and that isn’t going to change between appointments.  She says not to worry, they will book him with the other dentist.  Oh and did I mention the little cavity is now a deep cavity?? So they squeezed him in with the other dentist on May 3rd?!?

Then it is Joshua’s turn.  Joel is standing mute in the corner and Samuel is making baby noises but he is not screaming or crying.  When another dental assistant tells us to please go sit in the waiting room as it will be less of a distraction for everyone.  Then she added that it was time that Joshua learned to go in on his own.  I sat right by the door and could hear Joshua moaning, he told me afterwards he did not like it when we left but he was too afraid to ask if we could come back 🙁  Yes Joshua is 8 years old and his older brother and sister were probably going in by themselves, but I know my children and Joshua needs his Momma still.  I don’t expect him to still need me holding his hand when he is 12 but right now he does.  Cancer affects the whole family and when I was gone from home for 10 weeks it really affected him and he does not like to be left alone; we are working on these issues but it all added up to a really lousy time at the dentist.

That was not the end of the day we had to hurry home and get ourselves back out the door and off to Ottawa to go to the Children’s Hospital!  Joel was going to get his eyes checked again to see if the glasses were helping.  The answer to that is yes and no.  Yes his eyesight is better with the glasses on, but, no they have not helped to straighten his eye.

From there we rushed home to have a little party for Samuel… a bit of a warm up for Saturday. 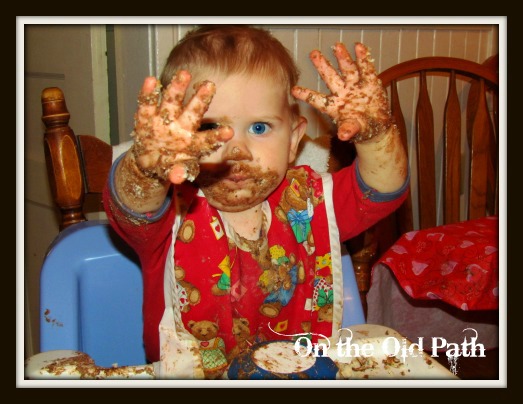 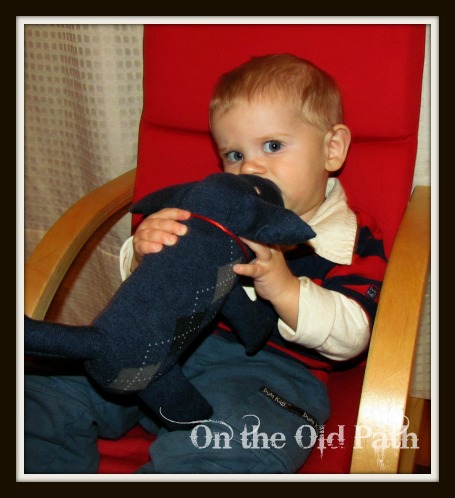 Which brings us to Thursday where Joel, Samuel and I head back in to town for another therapy session this time he had Occupational Therapy.  Again he loves going to therapy and it is great to see him being challenged and enjoying it.

Friday we needed to try to catch up on some housework and do a little baking as Mr. Kline was coming over for lunch and coffee.

Ah Saturday, clean house, work on Samuel’s Birthday present, bake a cake and then a ham.  We had Gramma, Biba and Uncle Kyle over for Samuel’s First Birthday Bash! 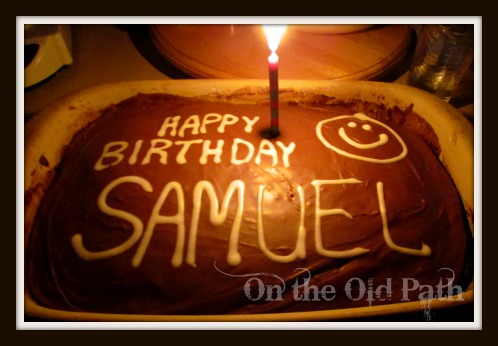 Shortly before my parents and brother came over, Joel came in from playing with his brother outside he was just fine when I looked at him and thought oh no what do you have?? Are we going to have to cancel the party are you contagious??  Then I saw little tiny pin pricks of blood.  Joel did you fall?  His whole demeanour changed, his little lip came out, “Yes!”  Ahh I thought so when I saw the blood.  BLOOD???? I need a hot chocolate!!!!

When the snow gets icy it can really hurt if you fall on it.   One hot chocolate later and he felt like a new man. 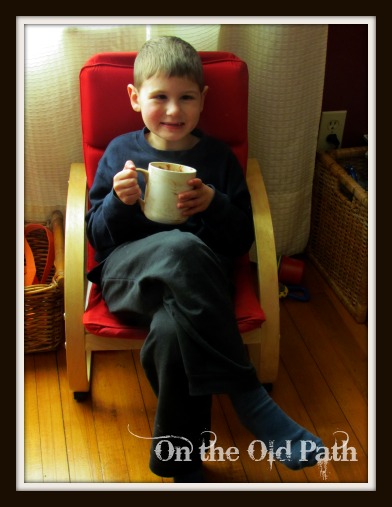 Lots of fun to watch him eat and open his presents. 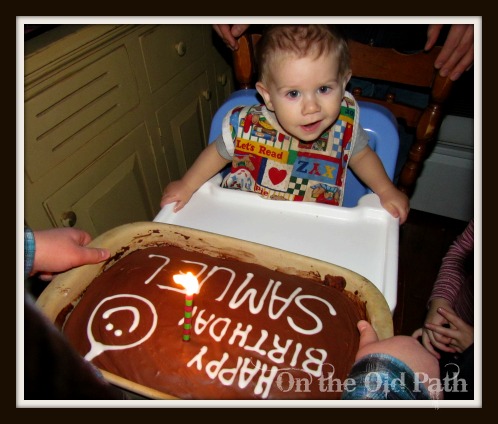 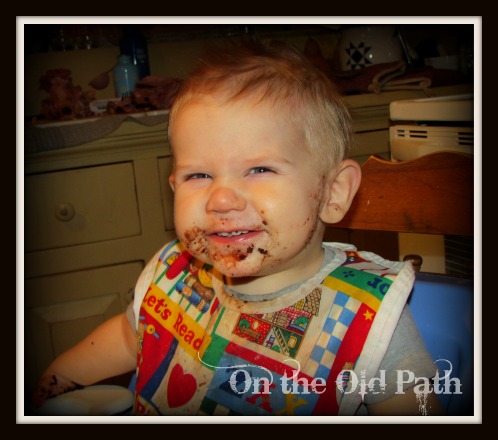 Fortunate guy he got to have Birthday cake twice in one week! 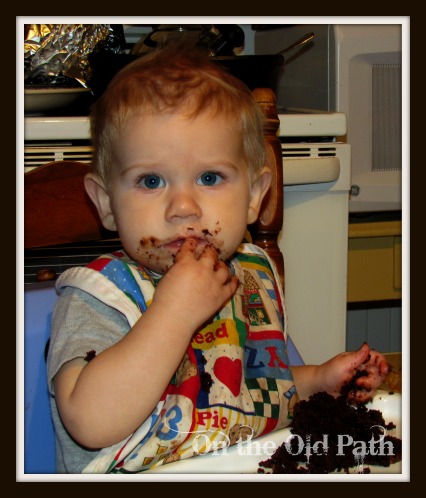 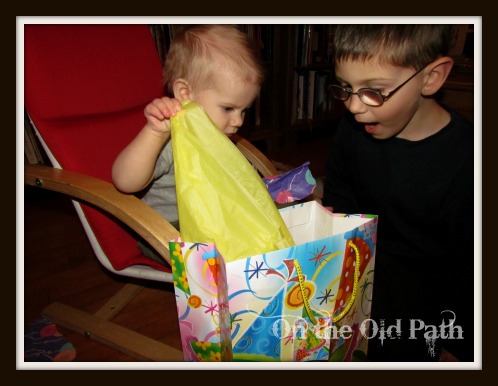 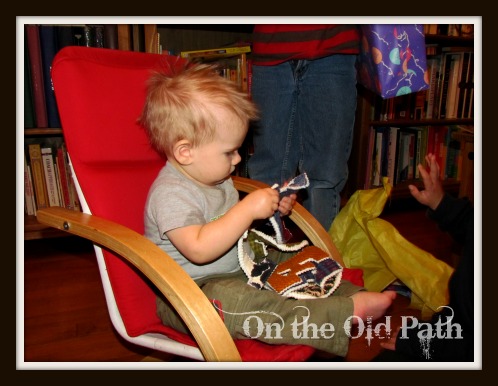 I made Samuel his own fabric Alphabet! Tutorial coming soon! 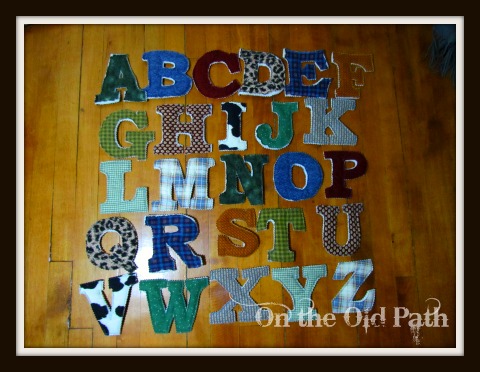 That was our week in a glance.