Sorrry to leave you all hanging… things went fantastic on Friday… well sort of.  Let me rephrase that Joel was fantastic!   We were up bright and early and headed off to the hospital.  Samuel let us know that this was not his idea of how to spend a Friday morning and cried most of the way there.

The weather started off as rain which for a brief moment changed to hail followed by sleet and finished off with snow.  It was also for lack of a better term foggy, which made visibility lousy.  Despite the weather we were making good time until about 2 km from our exit the traffic stopped, and then inched forward.  I watched as my 20 minutes early arrival time shrank and then went into the negatives. Great!

As we were finally approaching the hospital I realized I had no idea where my parking pass was.  From the backseat Joel asked if he was allowed to cry.  I had told him I expected him to behave, so I guess he wanted to know where crying fell in.  I told Joel if he was crying because he was sad or uncomfortable that was fine, but screaming, kicking and being rude was not acceptable.  That he still needed to be kind.

When we final got in to the hospital we were only a meager 20 minutes late.  Not too bad, who am I kidding I hate being late!  Thankfully, they seemed to be running late and did not appear to notice our tardiness. 🙂  We found ourselves a spot in the waiting room and Joel looked at me with his impish grin and said, “I asked God somethan good, yah want to know what?”  (Get ready for your heart to melt.)  Of course I told him I wanted to know.  With his hands folded he said, “I ask  Him, Him help me be brave cause of the drops.”    I told Joel it was such a good idea to pray about the things we are worried about.

Joel knew he was going to get eye drops and the last time was about a year ago but it was not a pleasant experience.  He screamed like his arm was being cut off and he flailed around making it next to impossible to get the drops in I had to hold him down it was awful.  When they called his name he jumped up and headed into the room, he smiled at the student doctor who was doing the pre-assessment.  He even answered a question this is unheard of, Joel has displayed selective mutism with new people and especially medical personnel.

He followed directions and answered questions!  When it came time for the drops I was ready for the fight… Joel lay perfectly still and did not make a sound.  He was incredible!  We had to wait  for the drops to take effect and Joel looked at me again and said, “I told you I be brave.”   Smiling, I said, “God heard your prayer Bubbie!  You were really brave.”

The doctor discussed surgery and a few other things that Joel does not want me talking about just yet!  (Building suspense for future posts… can you feel it?????)  When we were done we stop in to say Hi to Louise (our social worker at the hospital)  as we were talking somehow we got on to how we hate using the Bank machines in the hospital because they charge you an arm and a leg just to use them.  I was lamenting how I was going to have to us one today as we left our parking pass at home.  “Oh no your not!” she said.  She called security and let them know we were leaving shortly and to just let us through.  Awesome we did not have to pay the $13. 00 for parking!

Once we were on our way I told Joel we could go to Wendy’s as it was lunch time and I had not packed a lunch for us. While in line to order our lunch I noticed a sign saying their machines were down and it was cash only today.  Joel had behaved so amazingly and me being in an incredible generous mood decided to get him a little treat at  toys r us and then I would get cash back and we could come back to Wendy’s.

One action figure later we were standing in an incredible long line that moved along like a snail.  Finally, we get to the front of the line.

After all that I had to go to a bank machine to get cash out for lunch. We ate our lunch, feed Samuel for the second time, and headed back home. It was smooth sailing all the way home the road was clear and had dried up nicely!

On a completely different note there is never a dull moment with Joel. Monday night I was making supper when I heard, BANG, CRASH, BOOM!!! Before I even made it to the bottom of the stairs I heard the crying and found my crumpled little guy with blood pouring from his lip, still in his sisters sleeping bag.  Joel has balance issues and while he can walk up and down the stairs most of the time he prefers to bum slide down the stairs. Not sure why, but he got the idea it would be even faster to do that in a sleeping bag! While it was faster he learned that it was not necessarily wiser and definitely not safer to descend down the stairs in such a fashion. 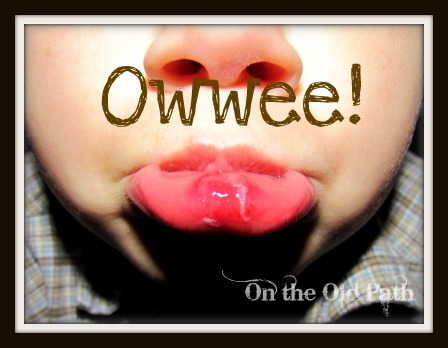 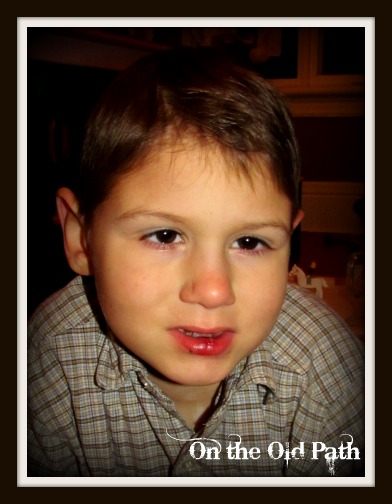 Just another wound for his war stories and this guy already has a pretty long list of them.  (I think I have a grey hair to go with each of them.)