I started this post last Wednesday but was too tired to finish and then our Internet went down. Dave and I seem to have an on going struggle with Internet connections. We are finally connected and going again. It is amazing how much we depend on it. It is how I communicate with many friends as I can do it once the children are all in bed and it is too late to pick up the phone. I check the weather… Answer various questions the kids hit me with ie. Who originally inhabited Jamaica??, just in case you are wondering, when Christopher Columbus landed there in 1494 it is said that there was a population of 60000 Arawak’s, who are believed to have been from Guyana. Sadly, after being enslaved to the Spaniards for only 50 years they completely died out and were then replaced by slaves from Africa, to read more about Jamaica’s early history click here. The children never cease to amaze me with there questions, what does a frigate look like? How deep is the ocean? What is the largest country in the world and which is the smallest?? I had a list of questions to google when we finally got back on line.
So here is my post that I started on last Wednesday… 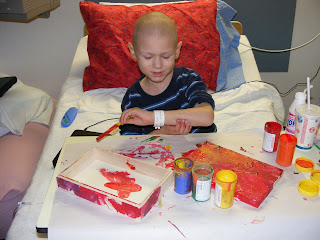 We have been to the hospital and are back home again, I could not access my blog so I was unable to keep you all posted. All and all it went fairly well. He was late starting treatment so we had to stay an extra night.
Joel had to reach a certain hydration level before they could begin. Instead of ending sometime between 6-8pm on Tuesday night he finished at Midnight. Hence, we decided to leave first thing Wednesday morning.
Joel won’t have this particular type of chemo again until January but when he does we will have him drink like crazy before we go in so he is already super saturated 🙂 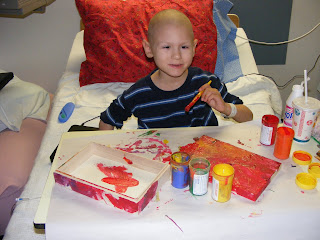 Joel loves to paint, here he is in his room painting a wooden box inside and out. He also painted these cool dragon flies. 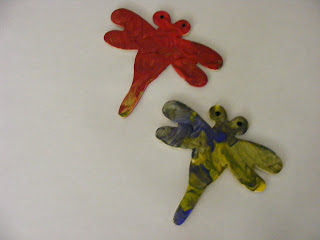 Time can drag at the hospital so it is nice to have things to fill up his day. We have learned that Joel likes old cartoons like Tom and Jerry so he usually watches the same DVD at the hospital occasional he’ll watch something new. With this last chemo they needed to watch things closely so when it was running he wasn’t allowed to leave his room but once it was done for the day we could head over to the playroom. We played some memory match games and then he painted some more!
I always bring some DVDs from home and favorite story books to fill our time too. Dave and the kids came up for a visit on the Tuesday normally they wouldn’t have come up for such a short hospital stay,but on Monday morning just as we were getting close to leaving I spilled Joel’s urine sample on myself. (Sorry if that is too much info.) Being pregnant I only have a couple of comfy outfits for hanging out at the hospital in. Yes, I did change but it was my favorite outfit so I threw it in the wash and they brought me my clean stuff the next day.
Then everyone was back first thing on Wednesday to take us home. Joel did very well with this chemo!!
UPDATE:
Joel did do well tolerating this chemo, however, his appetite has dropped and his blood counts are at their lowest yet. They figure they will continue to fall for a few more days before they will begin to pick back up. Basically this means we stay home, we can have company so long as they are healthy. If Joel gets a fever that hits 38 degrees Celsius (100.4 Fahrenheit ) then we go straight to the hospital. He has had a cold but seems to be mostly over it so hopefully his counts will rise and his appetite will return and there will be no need to head to the hospital!
Oh if you look closely at those pictures you’ll notice Joel has a 5 o’clock shadow on the top of his head, he is growing hair not sure why but it is growing!