I am sorry to leave you all hanging after an MRI.  Joel was a trooper once again.  Dave took him out first thing in the morning to the feed and seed to get some chicken feed.   Next they headed to Home Hardware to pick up a few things.  When they got home Joel played a trick on me, he walked in with an egg in his hand, I thought our chickens had finally started laying until he placed the cold egg in my hand.  Dave had taken Joel out of the house so the other children could eat as Joel had to fast.

We then headed off to the children’s hospital.  Joel was super co-operative.  He got in the gown, helped with the thermometer and blood pressure cuff etc.  He is very compliant but we believe Joel has selective mutism and it is rare for him ever to speak to medical staff.  You don’t have to be in scrubs to be considered medical staff: if you have a lanyard around your neck, you are hospital staff.

His MRI went off with out a hitch; he woke quickly, which is never a good thing for Joel, he was crying and wanting to leave.  It is a thing to see a child coming out of anesthetic, he can be crying and trying to get up and then asleep again,  and then awake and trying to move,  to sleeping once again.  We finally got Joel to drink some ginger ale and then slowly dressed him as he wanted to leave asap but they need to monitor him for at least 1/2 hour after waking up.

Joel insisted on walking out of the hospital albeit a wobbly walk as he still had drugs in his system and the kid has ataxia issues to begin with.

Our van is dying a slow painful (on the pocket book ) death… another story,  so friends from church lent us their van.  There was no way we were letting him eat in their immaculately clean van.  However, since Joel had had nothing to eat and it was already 2 o’clock we stopped at McDonald’s, where he slowly consumed about half of a Happy Meal.  We then had to make a quick stop for some lego as Joel has had some cash burning a hole in his pocket.

Finally we were able to head for home.  The good news is,   if there was something majorly wrong in the MRI we would not have been able to leave.  So now we wait for results.  I have a friend that refers to the waiting period as scanxiety.   I don’t think I am quite that bad.  Thankfully life is busy and there isn’t time to worry about the what if’s.  We have ‘now’ and ‘now’ is awfully busy.

Once again I want to remind us all to treasure today, these moments you have right now.   Don’t worry about next week or next month. Treasure now.  Tell your loved ones you love them.  Turn off the TV or the computer and read that bed time story.  Jump in the puddles, build a tent out of couch cushions and blankets because now is a precious gift.  Hug your babes because there are too many Moms and Dads whose arms are empty.

We got our sign put up and I have been meaning to post pics I did decide to go around the letters in black, it helped, I think! 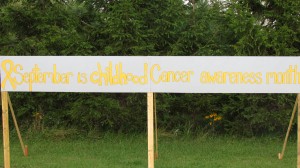 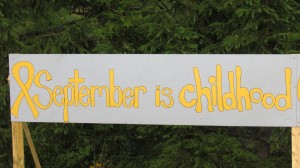 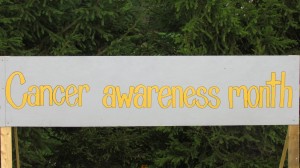 Also I still have a few necklaces for sale, $10 if you’re local and $12 if I have to ship; the proceeds are going to help Candlelighter’s: they support families of children going through cancer treatment.