Dave is at work tonight and I have Joel and Samuel sleeping in my bed.  Samuel who just turned one about 2 weeks ago is fighting a stomach bug he has lost his appetite and is not keeping anything down.  Joel’s stomach is fine but his emotions are struggling. 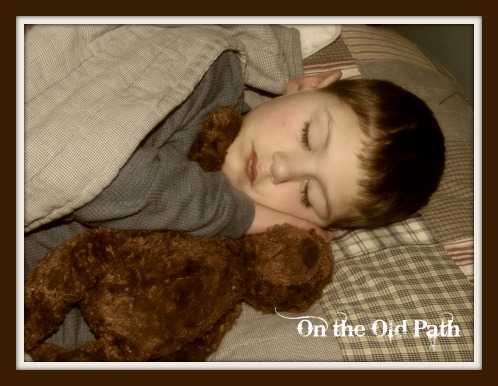 I had agreed to fill out a survey with Joel for a Doctorate research study which is to trying to understand the physical, psychological, and behavioral symptoms experienced by children who have survived a brain tumor.  They had a sheet of paper with 3 faces, a happy for not at all, an indifferent face for sometimes and a sad for a lot of the time.

It did not surprise me when he answered, ‘A lot’ for things like, ‘Can other kids do things that you cannot’ or ‘Is it hard for you to keep up when you play with other kids.’  But he also answered that he is ‘scared’ a lot of the time, that he is ‘sad’ a lot of the time and my heart broke when I asked the question, ‘Do you worry about what will happen to you,’  his eyes filled with tears and he pointed to the sad face and he began to cry.

We then had a long talk about what he was worried about, he is worried that the cancer is not gone or that it will come back and he is going to die.  My mind jumped back to when I heard him say to Samuel, “Samuel when I die you can have all my toys.”  At the time I had said something like, “Joel why on earth would you say something like that?”  I hadn’t taken the time to pull him onto my lap and search out where a statement like that had come from.  I felt awful that my little 6-year-old has been carrying such a weight.

I held him in my arms and told him he was safe, that the doctors said the cancer is all gone.  That our prayer is that it would never return.  I told him how loved he is and how special he is.  I told him that no one knows when they will go to be with Jesus but that God has the right time picked out for each of us and so there is nothing to be afraid of because it will be the right time when he does go.  I told him that we are all praying that he will get to live to be an old man but that none of us know when or how long we have.  We prayed together and then I told him I was sad that I did not know how worried and scared he was.  I told him that he could tell me anything if he was ever afraid of anything he could come and tell me.

In true Joel style with tears still in his eyes he told me there was something else he was scared of.  I told him I wanted to know, he said he was worried about  that there might be a large snake in his room because he had dreamt  about that once.  Thankfully that was an easy fix, there are no snakes anywhere in our house!  He grinned at me.  He is sleeping and I pray he is dreaming sweet dreams and I hope he  has been able to unburden his sweet 6-year-old heart of some crazy huge fears.