I am sorry everyone I really should get in the habit of posting a few lines even when life is crazy.

So I will Update you all on what has been going on…I believe I left you with Joshua and the stomach flu well thankfully by the next morning he was right as rain. I mentioned a little while back that since Bunny had what we think was a stroke even though he recovered that we felt his days were numbered. Well he continued to loose weight and I had told Taliah to prepare for the worst. She brought Bunny upstairs and told me she thought he was even thinner. I looked him over and told her again that I thought he was dying and that whether it happened in a day or a week it was coming. Which started Josh crying. Taliah said Mommy he just opened his mouth really big and I have never seen him do that before. I took him to look at him and he was gone. She sat holding him for a very long time. Bunny had been a much loved friend who would hang out in the doll cradle or just sit cradled by her for hours at a time it seemed. She had him for about 3 and a half years and it was hard to say good bye. Just the other day I gave her some veggie scrapes to give to the guinea pigs and she said I’ll give some to… oh never mind. I knew she had forgotten for a moment that he was gone. I really can’t believe that in 2 months my kids have dealt with 4 pet deaths! 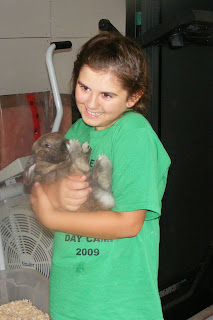 Not the best picture of Taliah but you can see she loved her Bunny. 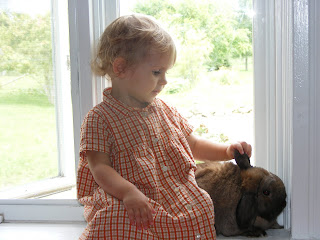 Next I was hit with the stomach flu and it was not so kind to me I was down for the count for a few days. (My immune system is not the greatest I welcome any advice, I am thinking of trying a Homeopath in the New Year.) Taliah was next to get it. Just as I was starting to feel a little better I came down with a head cold that is holding on. Hannah finally seems to be over her cold. Yeah. So I am sort of holding my breathe to see if anyone else is going to start with something.

I have to throw this in here too the other day the dog must have got something she shouldn’t have and threw up; my poor kids started saying things like she is too young to die she isn’t even full grown. I felt so bad for them they have dealt with a lot in the last 2 months that, that is the first thing they thought of:(

On a brighter note it snowed again…there is nothing like a fresh blanket of snow. As I went out to take a few pictures it was quiet and still and the snow crunched with every step. I think that is one of my favorite things about winter. 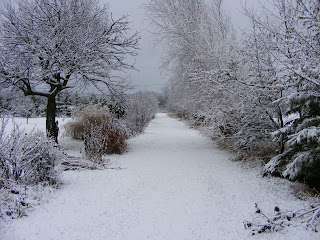 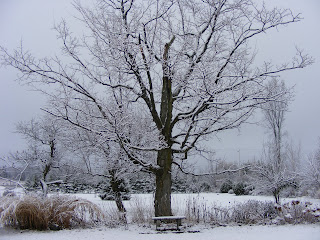 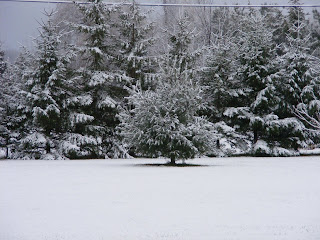 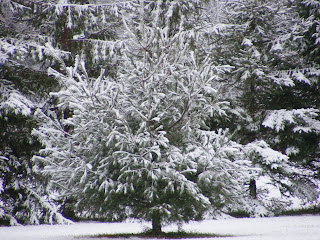 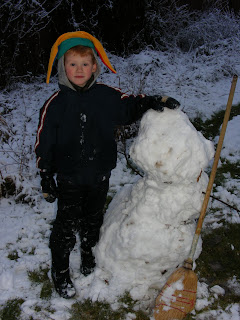 We are having a Christmas open house on Saturday so if you live local feel free to pop by. Dave and I decided we would get the tree early. We love to take the kids to cut one down so we headed out only to discover that it was a weekend only place. The kids where all set to get their tree and decided they would forgo the chopping down experience and go with a tree lot instead. Off we went to the near by village. Well, they were all in mesh bags how can you tell if it is a nice tree. We decided to drive in to the city for one. We went to Home Depot and theirs were all in mesh bags too! We remembered seeing some in another parking lot that weren’t bagged so we trekked off over there. Finally the most beautiful tree… we had found the one!! Dave asked the all important question,

“How much for this one?”

“Okay kids back in the van we’re going back to Home Depot.”

So with fear and trembling we bought a bagged tree and it is lovely. 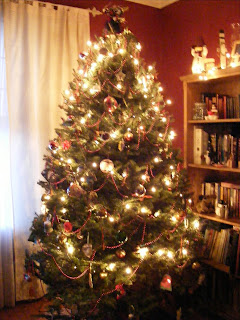 So that is what the last week or so has held for us.

Oh, one more picture maybe not the best picture of him but I thought it was too cute. With it being Advent we are doing all sorts of things to help us focus on Christmas. I guess Taliah was inspired and dressed her youngest brother up as a Shepherd. This is a picture she took of Joel! 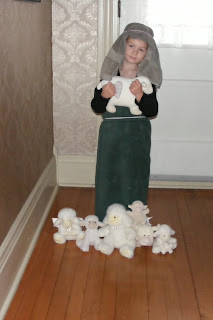