Not wanting to drive you all nuts with two days of, “I remember” I will drop it for part 2.

Joel woke at about 5:30 and he spoke to me which was a big deal as he had gone non-verbal the day before.  He was so chatty we talked about the birds that flew by the window and where they had come from and where they were going.  Joel looked deep into my eyes and my sweet 4 1/2-year-old said, “I think there is gonna be a really big test today.”  A bit taken a back, I nodded, “Yes a really big test.”  We talked constantly until 7 am and Joel went non-verbal again.  I tried getting him to talk but he would just nod or shake his head.  I prayed for what I knew this day would hold.  I begged God to not let those be the last words that I would share with my son.

At 7:30 our pastor and two other guys from church showed up to pray for Joel and anoint him with oil.  Then at 8 am Dr. Vassilyadi, Joel’s neurosurgeon came in.  I asked him if he had a good sleep??   “Excellent,” he answered.  After all this man was going to be operating on my son’s BRAIN!!  I asked him if he would mind if I prayed for him.  He agreed and I placed my hands on him and asked God to guide his hands to give the team strength for the task that lay ahead of them.  When I was finished praying, Dr. Vassilyadi did the sign of the cross, and it was time to start making our way to the OR.  I walked beside Joel as they pushed his bed to the elevator.  Joel hung on tight to his new moose friend, and he looked so small in the bed of white blankets.  Our pastor and 2 friends from church followed along but hung back a little.

The third floor was empty they do not normally do a surgery of this scale on a Saturday but Joel’s case was considered an emergency.  We stopped in a hallway and the nurses said, “Okay Mom you can give him a kiss good-bye.”  I told Joel how much I loved him and kissed him.  I desperately wanted him to say, “I love you too Momma,” but he remained silent.  His tender little hand reached up and rubbed my cheek and then they wheeled his bed away.  Had I been alone I think I would have collapsed to the floor as I felt my heart ripped from me in that moment… but I was not alone and with eyes filled with tears I turned to the 3 fellas waiting for me.  They had vowed to stay with me until Dave could get back to the hospital.

Dave had to go home the night before to feed the dog and make arrangements.  My Mom and Dad were going to bring the children back to our house and I needed some clothes.  I was in dire need of something more comfortable and easier to move around in than the long skirt I was wearing.  So Pastor Tim, Michael, Sheldon and myself headed down to the cafeteria to our surprise it is not open on weekends.  So we headed up to the Oasis cafe where they sell Mr Subs and Pizza Pizza.  I ordered some kind of breakfast burrito and let me tell you if you think that microwaving food does not genetically alter your food you have never seen eggs microwaved before it truly is something to behold.  (Am I right Tim?)

After breakfast we headed back to the deserted 3rd floor to wait.  We talked about all sorts of things.  It was nice to have conversation that could distract me from my thoughts.  Dave finally arrived and I could get changed.  The first 5 hours were the longest, they finally came and told us Joel was stable and they were in and the first bit of tumour was out and had already been sent to pathology.  The guys all left and Dave and I were alone for a while.  We talked and prayed, we were silent and then we talked some more.   The nurse came in again and said things were progressing well and the surgeon was pleased.  Michael and Orit came and sat with us for a while.  Finally, one of the team stopped in and said her shift was over and she was heading home but wanted to let us know the tumour was out and they were closing up.  All day long the surgery seemed like this huge hurdle that we just had to make it over.  He just has to live and make it through this surgery and then everything will be all right.  After over 11 hours they came and took us up to the ICU.   When I walked in to see Joel I hit a wall,  I was not at all prepared for what I saw.   My perfect 4-year-old was broken.

His face was puffy from being face down during surgery.  His one eye turned in terrible and he could not focus on anything.  His one side of his face had paralysis.  He wasn’t moving his right leg he would try to sit up but he had extreme ataxia and would fall over.  He had lost motor control of his right side of his body and his head flopped to the side.  He had red sores on his knees from being in the same position for so long.  He had a central line that he kept trying to pull at not to mention all sorts of wires and IV tubes.  The back of his head was shaved and he had a big bandage on the back of his head.  It was a very long night Joel kept crying for me so I stayed by his side the nurses tried to get me to sleep but I couldn’t I was beyond exhaustion.   Joel was not an easy patient he kept trying to get up or roll over and he constantly was tangling his tubes and wires and setting off machines.  One of the nurses told me she had never seen a child with so much fight in him with as many drugs as Joel had in him.  Yep that sounds like Joel.  It was brutally obvious that there was a very long road ahead of us.  Joel developed Posterior Fossa Syndrome a few days after surgery and went mute.  Over the last 2 years he has battled on.  He did 30 rounds of radiation and 9 cycles of chemo that ended in May 2011.  For the most part the cancer treatment has been the easy part for him,  sure it was tough, but not as hard as learning to walk and talk all over.  He has not won this battle yet and he fights on to regain what was lost 2 years ago.  Of course, I wanted the healing to be immediate or even last year, but I do know he has made ground over this past year and I pray for more healing this year.

On the Sunday morning (the 29)  at 9 am Joel went for an MRI where we found out they had completely removed the tumour, (a total resection).  Oddly enough, tomorrow the 29th at 9am Joel is going for an MRI, we of course are praying for clean scans! 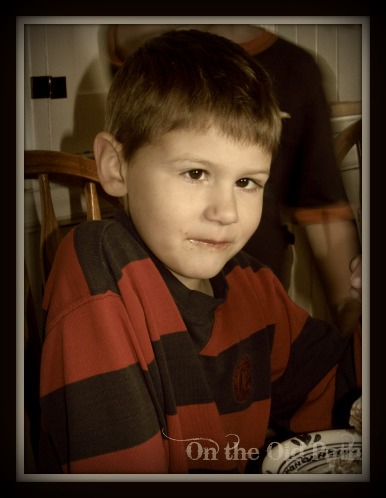