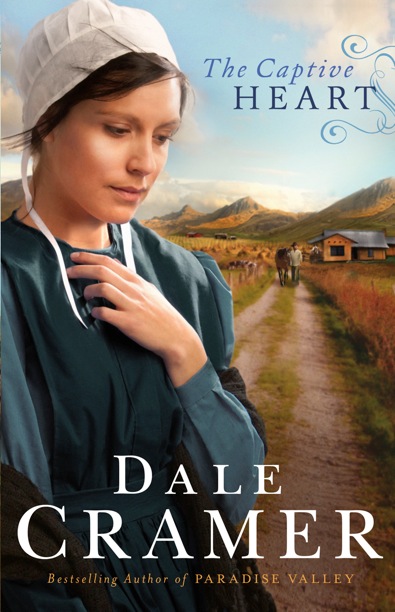 The Captive Heart by Dale Cramer

This is the second book in, ‘The Daughters of Caleb Bender’ series, yet if you have not read the first book this one still stands on it’s own.

I really enjoyed it, I have been under the weather lately and I read this one in a day while trying to take it easy.  You hear the over used term it was a real page turner, well, it was!

While it is classified as Amish fiction I would say this particular one was packed with a little more action than your average Amish tale.

Ravaged by disease, preyed upon by ruthless bandits, the Bender family’s second year in Mexico has taken a grievous turn.  Faced with impossible choices, the expatriate Amish discover, more than ever before, what it means to live by faith and not by sight.

But it’s Miriam who must make the hardest choice as her heart takes her on a new and dangerous course.  Domingo.  “He is gentle,” his sister said, “until someone he loves is threatened.”  Is Miriam that someone?          Inspired by Actual Events!

I need to go for full disclosure though, this is not a G rated read.  It deals with the harsh reality of settling into a new land that had been ravaged by civil war and was in very much a lawless state.  There is a shoot out with the bandits, there is a scene where someone is killed at knife point by bandits, there is also a young woman kidnapped and headed for slave trade.  Are these scenes described in graphic detail?…No!  It is a historical fiction and does describes the very real dangers that these individual faced living there.  This is not a book I would just hand over to a teenager without discussing some of these more adult themes.

That being said, it was well written and does a good job contrasting the too very different worlds that of the Amish and the Mexican outlaws.  As well as providing interesting characters that are believable and endearing.