No, I haven’t been reading Dickens lately, yet I am all for people reading the classics.  This is actually a tale of two hockey teams.  Probably one of the most unlikely things for me to be writing about.  In our house sports consist of who can lug the most laundry and keeping up with the latest preschooler.  All kidding aside we enjoy swimming, going for hikes, kicking a soccer ball around the yard, riding horses (not frequent enough I’m told) etc. but when it comes to organised sports are family is a little lost.

Neither Dave nor I are into competitive sports, it isn’t that we have anything against them it just isn’t something that was overly stressed in our lives growing up.  Now if your a Canadian then you are supposed to be a hockey fan, some how that seems to be increased exponentially if you are a rural Canadian.  (I know I am being terribly stereotypic.)   At any rate here I sit a rural Canadian who cheered her heart out about this time last year watching Olympic hockey.  Yet when it comes to NHL I don’t sit and watch a game.  I was born in Toronto and while I only lived there for a few short months of my life, it was ingrained in me by my Dad we bleed blue.  “You have to cheer for Toronto you were born there!!”

Maple Leaf fans are a loyal bunch, they are dedicated to the team.  If I have my stats right the Maple Leafs have won the Stanley Cup 11 times.  Woohoo way to go team… but not in my life time, not since 1967.  That is the longest Stanley Cup drought in the NHL.  Yet Toronto seems to sell more fan paraphernalia then any other franchise. I have to admit blue is my favorite colour and I love cheering for an underdog!

The other city is Ottawa.  The Ottawa Senators, this year has been a tough year for the Senators fan.  Now the Sens have a rich history and a confusing one for an unprofessing (I think I made that word up) hockey fan.
The stats are debated as to how many Stanley Cups the Sens have won between 9-11, but that was the old franchise, the new one has yet to win the coveted trophy.

So what would cause a blue loving maple leaf girl to consider putting on red and cheering for the Sens???? One might argue location, we are now living in Sens territory.  Yet we have lived here for a few years and this is a recent development.  I’ll give you a hint it has something to do with this guy. 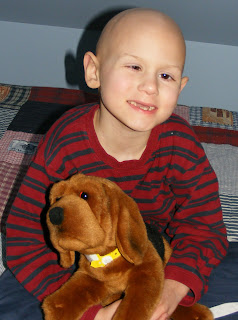 No Joel isn’t a huge hockey fan, he likes the idea of hockey but fan is not a word I would use to describe him. Joel’s hospital (CHEO) is in Ottawa, and the Ottawa Senators do a lot for the hospital.  There are a number of guys from the team that really care about the kids and give of their time freely.  Our family has been blessed by them and the smiles they bring to the  faces of the kids at the hospital.

So what have I decided will I cheer for blue or red?????  Well, this is where you can see that I am not a true hockey fan… I am going to cheer for both, you might see my kids wearing a Toronto Jersey, while playing with a Sens mini stick.  I’ll try to make sure their shoes match though. 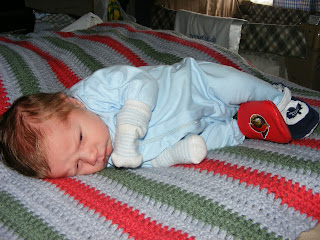 Just because I think he is so cute I had to stick one more picture of Samuel in.  He seems to have caught the cold that is making its way through my family.  Samuel is really congested so I’d love prayers that his congestion would clear quickly. Thanks everyone!! 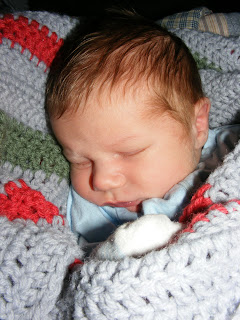 Oh and do you cheer for a favorite team???