We are finally back on line. We have a new Internet provider and things seem to be working out wonderfully. I have lots to update you all on, October has been a busy month… yet I really don’t know where to begin.

It has been a month of ups and downs for us. Joel had a busy month at the hospital, he had a big Chemo which was a hospital stay. Then he was back for a top up the week after. This month he had an MRI with contrast, an eye exam with drops, a hearing test, and a GFR test (which checks kidney function).

So, good news and bad news; I’ll start off with the best news Joel’s MRI was completely clear no signs of new growth. Joel tolerated this Chemo really well there was no dive in his appetite. He is still rather under weight but he isn’t losing any more weight. Yet his blood counts hit their lowest yet. Unfortunately, the hair that everyone had just started to notice has pretty much all fallen out again. We all knew this could happen but we were enjoying the new growth. His hearing test showed he has lost the very highest frequency but some people don’t have this anyway and apparently as we grow older we lose this frequency. The two ladies doing the test have already lost this frequency. Joel’s eye is no longer showing any improvement. His good eye is starting to show some weakness as he favors the other eye. Joel is going to need to wear an eye patch for 3 hours a day to strengthen the good eye. As for the one eye that is turned in, at this point they do not want to further stress Joel’s system so they are going to wait until his Chemo ends in the spring and then try Botox injections to see if they can relax the muscle around the eye and see if the eye will then return to its normal position. If that is not successful then they will have to do surgery to move the eye muscle back into place. As this is all several months away it is our hope and prayer that the eye will correct itself on it’s own before then. The doctor does not think that will be the case, yet with God all things are possible.

Renovations to our attic bedroom for the boys is at a bit of a stand still. With all of Joel’s appointments at the hospital (not to mention home visits for physio and OT) we have just been too busy.

We also squeezed some celebrating in to this month. Here in Canada we had our Thanksgiving this month and both Dave and my Dad (aka Biba) had their birthdays this month.

Sadly, last Saturday as well as today, we had our last two guinea pigs pass away. Odd that they passed exactly a week apart, neither of them showed any signs of illness yet they were getting older. Last week hit the kids particularly hard, ‘Lucy’ was one of our very first guineas. Today ‘Joshie’ passed and it seemed to hit Joel the hardest. Actually, both weeks Joel was the one who took it hardest.

Elijah gave us some cause for concern he had been complaining of groin pain (he’ll love me for sharing that) finally, Dave took him in to the hospital and they did an ultrasound. They found he had a twisted piece of tissue that was causing the pain yet it wasn’t cutting off blood flow so it didn’t require immediate surgery. They told us to bring him back in the morning, fasting, and they would do surgery then if the pain had persisted. We headed back the next morning, but as the morning wore on Elijah’s pain decreased so we all decided it was best to leave things alone. I am happy to say that Elijah is currently pain free! 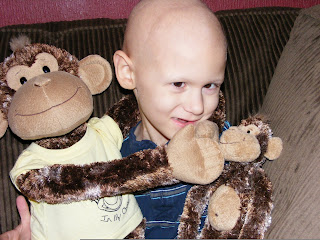 One of our high points this month was a package Joel received from, ‘There’s a monkey in my chair.’ This is a wonderful program, to qualify your child must be undergoing treatment for cancer or a brain tumor. Joel doubly qualified. He received a duffel bag full of goodies: a disposable camera, pencils, photo album, story book etc… but most importantly 2 stuffed monkeys. The smaller of the two monkeys will accompany Joel to the hospital when he heads in on Monday morning for Chemo, the larger monkey will stay here to fill Joel’s chair and give cuddles to the kids when they miss him. As we homeschool he is here for our kids, but if Joel was attending a school outside of the home his monkey would fill his seat at school. Cancer affects so many people. When a child has absences from school due to an illness like cancer it impacts the whole class of children. To learn more about, ‘There’s a monkey in my chair’ please check out their website, with Christmas coming maybe you would consider making a gift to this foundation. 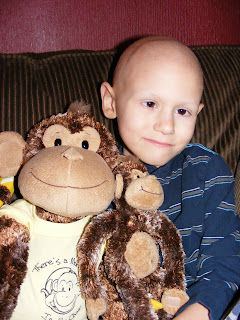 I’ll post more monkey pictures later with the other kids but for now I thought I’d throw these ones in. I am sure I have missed many things that I probably should be filling you all in on but at this moment that is all that comes to mind.